Teamwork founders up for EY World Entrepreneur of the Year award 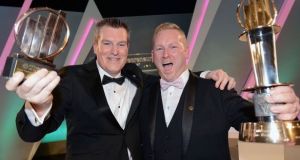 Daniel Mackey and Peter Coppinger of Teamwork, pictured after winning at the EY Entrepreneur of the Year Awards in Dublin in October. Photograph: Dave Meehan

Some of the most successful business leaders in the world will be in Monaco this week for the EY World Entrepreneur of the Year awards.

Irish entrepreneurs Peter Coppinger and Dan Mackey, founders of the fast-growing tech company Teamwork, will be among those battling it out at the awards ceremony at the Salle des Eoiles on Saturday to be named EY World Entrepreneur of the Year.

Founded in 2007, Teamwork is a software-as-a-services (Saas) company whose clients include Disney, Netflix, Forbes, Paypal and Spotify.

“Each year, EY World Entrepreneur of the Year recognises the highest calibre of entrepreneurs from around the globe who are leading the charge and breaking the mould across a huge number of industries and sectors,” said Kevin McLoughlin, partner lead for the awards programme. “It is fantastic to see our own homegrown entrepreneurial talent competing on the world stage.”

Last year’s winner was Brazilian property developer Ruben Menin, chairman of MRV Engenharia, a company he founded in 1979 with his two brothers when he was just 21. Mr Menin was the first winner of the competition to come from South America.

The event, now in its 19th year, honours the leading innovators behind products and services in more than 145 cities and more than 60 countries.

In addition to the prestigious award, this year’s programme includes a series of summits, keynote interviews and panel discussions. Among the guest speakers is Lord Karan Bilimoria, the chairman of Cobra Beer Partnership, which now generates about $250 million (€223 million) annually in global retail sales.