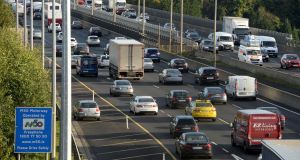 A company has lost a High Court challenge to the awarding of the €200-€400m contract to operate tolls on the M50.

A US multinational tolling technology company has lost a High Court challenge to the awarding of the €200 million- €400million contract to operate tolls on the M50 and other roads in the Republic.

Transcore LP sued the National Roads Authority, now Transport Infrastructure Ireland (TFI), over the awarding of the contract to Turas, a consortium made up of Abtran, Vinci Concessions SAS and Vinci Highways SAS.

Turas was a notice party in the case and an application by the current toll operator, Emovis Operations Ireland, to intervene when the Transcore proceedings had nearly concluded was refused by Mr Justice David Barniville.

Emovis, also an unsuccessful bidder, has its own separate proceedings pending before the court over the public procurement contest.

The existing contract with Emovis has been extended and will expire in March 2019. An automatic suspension on the awarding of the new contract remains in place pending determination of those proceedings.

The court heard the M50 is one of the most heavily trafficked and strategically important corridors on the national roads network with on average 136,000 vehicles per day travelling through the tolled section.

Transcore is a Nashville, Tennessee, USA, registered wholly owned subsidiary of Roper Technologies, a New York Stock Exchange-traded Standard and Poor’s 500 corporation, with annualised revenues in 2016 of €3.54 billion. It specialises in innovative tolling system technology around the world.

Mr Justice Barniville said while there were many issues of fact ventilated during the hearing, the essential question for him to decide was the interpretation of the quality scoring matrix in respect of one of the criteria used for evaluating one of three delivery plans required to be prepared and presented by each bidder.

Transcore challenged the TFI’s interpretation and application of the scoring matrix in relation to one of the marks given to Turas in respect of the criteria under which the delivery plan was to be evaluated.

Transcore said the TFI misapplied or misinterpreted the scoring matrix. Had Transcore been awarded one more mark, it would have achieved a higher overall score.

The TFI, supported by Turas, disputed the claims.

The judge said the apparent simplicity of the issue of interpretation of the scoring matrix was somewhat illusory.

Having reflected extensively on the issue of interpretation, he had concluded the interpretation of the tender documentation put forward by the TFI was clearly correct.