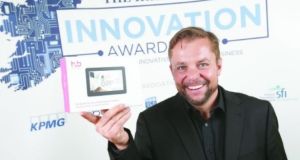 Oliver Hynes, HUB Controls chief executive. The company with US expansion plans is targeting sales of €10 million by the end of next year

Irish smart home energy company Hub Controls is to create 50 jobs as it plans its expansion into the United States.

The company is targeting sales of €10 million by the end of next year. That compares to revenue for this year that is understood to be closer to €500,000.

The new jobs, due to be created in the next two years, will be in areas such as hardware and software development, data and energy analytics, operations, and sales and marketing.

Hub Controls recently won the backing of London-based Exergy Capital Management, an investment firm focused on energy and interconnected sectors. The firm is focused on facilitating the transition to a low-carbon economy by funding the necessary infrastructure and technology.

According to documents filed with the Companies Registration Office, Hub Controls has secured a €2.5 million cash injection from investors that include Exergy and Enterprise Ireland.

Hub Controls said it has “ambitious” expansion plans over the next four years, developing a US version of the Hub Controller smart thermostat. “We felt having a partner like Exergy on board is a key first step to getting our product and services out there,” said CFO Conor Fahey.

The company’s plans for expansion into the US were given a boost with the recent win of a $500,000 prize in US clean tech competition 76 West.

“Our success at the 76 West awards was about much more than the money. The award is sponsored by the New York State Energy Research Development Authority – a lead actor in the clean tech space in the US. We now have access to the range of supports that it and its network offer to households to upgrade their homes,” said Mr Hynes. “This is a very strong entry point into a very promising market.”

The company is also planning to expand in Britain.

Hub Controls, which was founded in 2014 by Oliver Hynes and operates out of IT Tallaght, creates smart home energy products designed to give households control over their energy bills and move to cleaner home heating. Its main product, the Hub Controller, was designed and engineered in Ireland, and is manufactured by Dublin based Xunison Ltd.

The company has agreed to put 2,000 controllers into Irish households as part of a trial with the Sustainable Energy Authority of Ireland (SEAI). Anonymised data gathered from trial devices will be shared with the energy institute in UCD and the SEAI.

1 How can I view my dead brother’s will if I’m not the executor?
2 Investors pile into property as turnover in build-to-rent sector reaches €2.54bn
3 Kerry’s Chinese sales set for 30% hit from coronavirus
4 Provisional liquidator appointed to Dublin engineering firm
5 Bursting of Tesla bubble a case of ‘not if, but when’
Real news has value SUBSCRIBE