How to . . . keep your kids safe playing Fortnite

The rules for parents keep changing, but there are some steps you can take 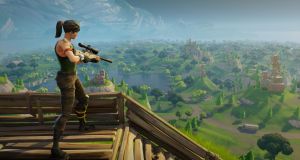 Fortnite: it’s all about being the last one standing.

Depending on how old your child is, you may have heard about Fortnite. It seems as if the game is everywhere these days, with some of the celebrations and dances even making it out of the game and into the mainstream.

But while players love it, parents may be less than enthusiastic. In the past few months there have been numerous reports of parents discovering their children are being groomed, and the finger is being pointed at Fortnite as the medium. Understandably, there are concerns about the game and its effect on younger players. So what exactly is Fortnite? And is there anything to worry about?

We’re really talking about Fortnite: Battle Royale, which is the game’s most popular mode, and more importantly, it’s free. It’s a multiplayer battle that pits 100 people against each other, and the last player standing wins. You can choose to fight solo, or link up with other players in squads in search of that victory.

You all pile on a flying bus and jump out over the playing area, meaning everyone gets scattered throughout the map to explore buildings, find weapons and hunt each other. Not only do you have to avoid being killed by other players, you also have to avoid being taken out by the storm that is descending on the island.

It’s now cross platform, so Xbox players can play alongside iOS or Switch, and Sony is now getting in on the act too. So you don’t need to have the same console as your friends to play with them.

Why should I be concerned?

There are about 125 million players worldwide. The game itself is rated 12, so although there is fighting, shooting and people die, the violence is cartoon and there is no blood. There are also plenty of costumes and other

But the age rating is not where the problems with Fortnite lie. Battle Royale is essentially a room of 100 strangers. While the majority of Fortnite’s players aren’t there under false pretences, there have been some reported cases of grooming through the game. It is mostly happening through voice chat, though in the case publicised on Claire Byrne Live recently, most of the messages were sent privately.

Best case scenario, your children might learn a few choice swear words - the game might be rated 12 but that doesn’t mean the players are all around that age, and with an open mic and a tense game, things can get heated.

What can I do?

There are a few (some completely unrealistic) things you can do to help safeguard your children.

A knee-jerk reaction that is highly unlikely to work. Fortnite is available cross platform, including on mobile, so there’s a good chance if you ban it from the console, they’ll find another way to play and not actually tell you.

Most consoles have parental controls that will allow you to restrict gaming time. So if you put a time limit on a Fortnite session, it stands.

To activate parental controls on Xbox One

Log into your Microsoft account at https://account.microsoft.com/family. If your child is already listed as part of your family, you will be able to set screen time limits from there; if not, you will have to add them to your family first.

To activate parental controls on PlayStation 4

You can access parental controls on the PS4, through a web browser or through the PS App. On the console, go to Settings >Parental Controls/Family Management >Family Management. You’ll be able to set time limits here, or view your child’s total playing time for the day. You can also access controls through https://www.playstation.com/acct/family.

The Switch has an app for parental controls, imaginatively titled Nintendo Switch Parental Controls. You sign into the app with the same Nintendo account you use on the Switch, and once you are all set up, you can limit play length, play time and what games your children can play on the device.

To activate parental controls on iOS

If your child’s iCloud account is part of your Apple family account, you can set screen time restrictions from your own iPhone. Go to Settings>Apple ID>Family Sharing and select your child’s account. Then select Screen Time. You can set limits for categories of apps - in this case, it’s games - and customise it for each day of the week. For example, you might allow your children more time playing at the weekend than during the week. You can also set a “downtime” period, that blocks access to all apps during that period unless you specify a select few.

You can also restrict in-app purchases, which is probably a good idea of Fortnite as the extra costumes and moves can add up very quickly. You don’t want to be the parent getting a surprise €800 bill for Fortnite accessories.

To restrict access to the game itself, you can also install something like the iKydz Pro, which gives you the option to cut off the internet to certain devices through the accompanying app, among other functions.

You can also ditch voice chat if the thought of it makes you too nervous. Voice chat is an essential part of the game though if you are playing in squads. Without it, you can’t communicate effectively with your other team members. You can mute individual players as you come across them, but if your voice chat is set to on, anyone new will automatically be able to chat to you (or your child).

When you open the game, go to Settings, Audio and switch voice chat to off. Other players won’t be able to hear you, and you will no longer hear other players.

If you don’t want to cut off chat altogether, the other option is to make sure your child is playing without a headset, somewhere where you can hear the conversations going on and step in if necessary.

There is a global messaging in the lobby areas of the game that can be disabled in the settings menu too. I’ve never had global chat working properly, but if it is working properly and you’d rather it wasn’t, you can easily disable it.

Shutting off voice chat and restricting game time will only get you so far. In fact, all the parental controls in the world will only be effective as long as your child doesn’t find a way around them - and they usually can. Staying one step ahead can be a full-time job.

It was easier in the past: there was a family computer, and the advice was to keep it in the living room so you could supervise your child’s online activity. Now you can access the internet through smartphones and games consoles. Social media is an everyday thing, and as a result your children may be coming into contact with total strangers every day - something that used to be a complete no-no but has now become commonplace.

The best thing to do is sit with your child, find out what they’re playing and who they are playing with. Watch what’s going on and listen to the chat. Watching someone else play a video game you have no interest in is probably up there with watching paint dry, but it’s the most effective way to find out what’s going on.

You can still insist that your child doesn’t add anyone as a friend on Xbox Live, PSN or Epic (for cross platform players) that they don’t know in real life.

If you or your child do come across abusive players, you can report them. If you have enabled cross platform playing, they may be on a different system so you have to take it up with Epic. You can report them after them game (there’s a report player button) or by sending their name to Epic directly.