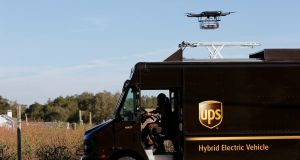 The drone dropped off a package at a farm outside Tampa, Florida, and returned to the UPS truck, which had moved about 600m.

Delivery firm UPS is preparing for the day when your latest purchase may be dropped off not by a brown-clad delivery driver but by an octocopter drone. The world’s largest courier took a step closer to that future on Monday, launching an unmanned aerial vehicle from the roof of a UPS truck about 400m to a farm outside Tampa, Florida.

The drone dropped off a package at a home on the property, and returned to the truck, which had moved about 600m. The test shows how UPS is looking to drones as a way to cut costs and ease delivery in hard-to-reach places.

Monday’s trial was the clearest indication that Atlanta-based UPS wants to use drones for home delivery, as do internet retailer Amazon. com and Google parent Alphabet. Those companies and others still must overcome significant regulatory hurdles before delivery by drone becomes the norm.

UPS said it had not calculated how much the potential shift could help cut costs, but estimates in general that reducing each driver’s mileage by a mile a day (1,600m) could save $50 million (€47.3 million) a year. The company operates more than 100,000 road vehicles, according to its website.