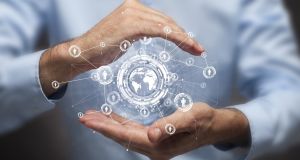 Digital technology is expected to enable strong growth in Irish businesses this year, a new survey has found.

The Virgin Media Business Digital Insights Report found the majority of Irish companies rated their prospects for growth as good or very good over the 2017-2018 period, with confidence rising from the previous survey. Some 30 per cent rated growth prospects as “very good” and 56 per cent said they were “good” in the most recent survey, compared with 14 per cent and 66 per cent respectively in the 2015-2016 period.

Almost three quarters said the growth would be down to digital technologies, and the majority said they would be investing in a bid to fuel that growth.

Revenues are set to grow by 19 per cent, companies said, though implementing a digital strategy could see that growth increase to 26 per cent.

Online sales could reach 40 per cent this year, rising from 33 per cent last year.

“The fact that so many businesses are confident about growth and will create new jobs over the next two years shows the strength of the economic recovery and long may it last,” he said. “Businesses are also telling us that the delivery of better customer experiences is becoming more and more dependent on digital. The availability of high-speed broadband is also central to the relationship between businesses and customers.”

Despite the upheaval caused by Brexit and the changes in the US political environment, exports are expected to play a bigger role in this growth, with 21 per cent of businesses saying they expected to sell products into the UK market.

Businesses said security breaches were a bigger concern, with 61 per cent considering them a risk, and 52 per cent worrying more about data protection issues. Brexit and the increased competition it could bring from the UK was only cited by 20 per cent as a risk to their business.

The report surveyed 200 decision-makers in 200 businesses around Ireland in the final quarter of 2016.