Uprise festival to shift main conference from Amsterdam to Dublin 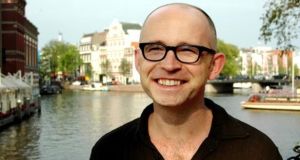 Uprise, a “people first, tech second” festival that began life in Amsterdam before expanding to Dublin, is to relocate its main conference to Ireland.

The festival, which was established by Limerick man Paul O’Connell in 2015, is due to be held in Dublin for the second time later this month with more than 500 companies and 128 speakers participating in the one-day event at the RDS.

“Amsterdam has created unique benefits for the festival but proves difficult when a company wants to scale quickly in Europe and beyond. The advent of Brexit and global financial institutions repositioning headquarters to Ireland and the country’s strong push to bring these companies here has outflanked the Netherlands bid for the same business opportunities by quite a stretch from our perspective,” Mr O’Connell told The Irish Times.

“Launching the first Ireland-based Uprise Festival last year was quite a challenge with the current lack of visitor accommodation and the rising costs of services in Ireland compared to Amsterdam and mainland Europe in general but the positioning of Ireland as a jump-off point to the US and also into Europe from North America was a major point in the decision-making process,” he added.

Among the companies taking part in this month’s event include speakers from Shazam, Deezer, Sigfox, the Economist, Warner Music Group and Intel.

Mr O’Connell said the support the festival, which has a big focus on start-ups, had received locally had also been a key factor in leading the company to relocate to Ireland.

“While we feel the Netherlands has built a fantastic natural ecosystem, Ireland is still emerging and feeling its way to building support structures for both growing companies and enabling multinationals to connect with more talent and fast growing companies across Europe. This is where we know we can help,” he added.

1 Opioid executive admits to ‘no morals’ ahead of prison term
2 Are there annual limits on inheritances or gifts to a child?
3 South Dublin Credit Union members urged to borrow more to ensure survival
4 NI businesses fear burden of post-Brexit red tape on goods transport
5 Who are Ireland’s 17 billionaires?
Real news has value SUBSCRIBE