Commission says Government dragging feet in collection of back taxes 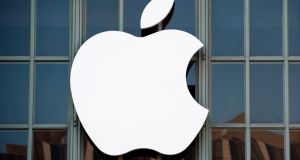 The European Commission has moved to refer Ireland to the European Court of Justice for failing to recover up to €13 billion of illegal state aid from Apple. Photograph: Josh Edelson/AFP/Getty Images

The European Commission has moved to refer Ireland to the European Court of Justice (ECJ) for failing to recover up to €13 billion of illegal state aid from Apple, which may ultimately lead to a fine.

The decision has triggered a strong reaction from the Government in Dublin.

The Republic had been given an initial deadline of early January to recoup the money, plus interest, and hold it in an escrow account pending the outcome of appeals by both the State and Apple against the EU’s original decision from August last year.

However, it is not now expected that the handover of the money will be completed before March of next year. Revenue officials are continuing to calculate the exact amount it needs to collect, estimated at up to €15 billion including interest, and the Government is currently in the process of setting up an escrow account and finding custodians and investment managers to handle the money.

According to EU rules, the commission can firstly seek a declaration from the ECJ that Ireland has failed to comply with the commission’s decision. If Ireland doesn’t recover the alleged aid after an initial ECJ ruling, the commission can then bring a second case, which may result in the court imposing a fine.

“I do hope that it’ll never get to that point,” EU commissioner Margrethe Vestager said at a press conference in Brussels on Wednesday. “Ireland has not recovered the tax benefits, not in part, but they are taking steps to get there. But I do hope that they will get there before we enter more conflictual waters.”

The Government expressed disappointment of the commission decision to trigger a European Court of Justice referral.

“Ireland has never accepted the commission’s analysis in the Apple state aid decision,” the Department of Finance said in a statement. “However, we have always been clear that the Government is fully committed to ensuring that recovery of the alleged Apple state aid takes place without delay and has committed significant resources to ensuring this is achieved. Ireland fully respects the rule of law in the European Union.

“That is why it is extremely disappointing that the commission has taken action at this time against Ireland.”

The Government is currently in the process of finding custodians and investment managers to handle the money, pending the outcome of the appeals process, which may last more than four years.

“We, of course, understand that recovery in certain cases may be more complex than others, and we always hope to assist,” said EU commissioner Margrethe Vestager. “But member states need to make sufficient progress to restore competition. That is why we have today decided to refer Ireland to the EU court for failing to implement our decision.”

The Government and Apple filed separate appeals last year against the commission’s decision that the Revenue Commissioners afforded Apple an unfair advantage in two “rulings”, in 1991 and 2007, by allowing the group channel most of the income from European sales through “head office” divisions of two Apple subsidiaries in Ireland, which were non-resident for tax purposes.

However, Apple and the Government argue that because the iPhone and iPad maker’s products and services are created, designed and engineered in the US, the bulk of the profits of the units are due on the other side of the Atlantic.

Separately, the European Commission said on Wednesday that Luxembourg must collect around €250 million of back taxes from Amazon, which amounts to “illegal” state aid.

“Luxembourg gave illegal tax benefits to Amazon,” Ms Vestager said. “As a result, almost three quarters of Amazon’s profits were not taxed. In other words, Amazon was allowed to pay four times less tax than other local companies subject to the same national rules.”