ApisProtect was only established by Fiona Edwards-Murphy earlier this year 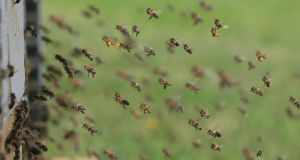 ApisProtect, a Cork-based start-up that uses the internet of things (IoT) and big data to help beekeepers reduce losses and increase productivity in hives, has been named Ignite business of the year.

The company was established earlier this year by Fiona Edwards-Murphy (26), a UCC student from Kanturk, who is currently pursuing a PhD in electrical and electronic engineering.

Given that as many as 50 per cent of the estimated 81 million beehives around the world are lost every year, there has been considerable interest in the company’s technology.

Ms Edwards-Murphy has previously been awarded at least eight academic publications and received a number of awards from bodies including the Irish Research Council, IBM, the Irish Laboratory Awards and Google.

Ignite is an international award-winning business start-up programme that specialises in supporting recent third-level graduates to turn an innovative idea into a successful, scalable business. Since it launched in 2011 the initiative, which is sponsored by Bank of Ireland, has supported more than 60 start-ups with more than 80 founders .

Some of the start-ups to have gone through the programme have gone on to raise funding, become Enterprise Ireland client companies and access international markets.

The initiative, which is based at UCC, is open to all recent graduates from all disciplines from all third-level institutions across Ireland.

Previous winners of the business of the year award include VConnecta and AnaBio.

1 Explainer: what is the row about SF’s multinational tax plan?
2 Personal insolvency practitioner to pay €6,000 after providing misleading details
3 Britain after Brexit will not be alone, but it will be lonelier
4 Getting out from under ‘never-ending’ Celtic Tiger debt burden
5 Banks withdrawing from ATMs – another failure of regulation
Real news has value SUBSCRIBE