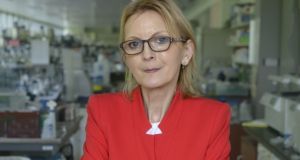 Prof Therese Kinsella, who leads the company, said there was considerable interest from investors so far. The round is expected to close in two tranches, the first of which she hopes will complete “as soon as possible” with a plan to raise an initial $5 million (€4.2 million).

Among its backers is Green Property founder Stephen Vernon who recently invested in the company via the John Pollard Foundation. “We have broadened the fundraise so that we are talking to investors, not just in Europe but also in the US and farther afield and we are in discussions with a number of potential backers,” she said.

“The financing is needed firstly to enable completion of the clinical trial programme for our lead drug NTP42 with a plan to start phase one trials in the first quarter of 2021. The second component is to secure marketing authorisation for the drug,” Ms Kinsella added.

Atxa was founded by the professor of biochemistry in 2015, and is the culmination of more than 20 years of research.

The drug company has identified a range of molecules that could tackle a number of conditions. Its first target is pulmonary arterial hypertension (PAH), a rare, progressive disorder in which the muscles in the walls of the arteries in the lungs become thickened and make it harder for the heart to pump blood through the lungs.

PAH carries an enormous health burden, with an annual spend of up to $5 billion (€4.2 billion) globally, which is expected to exceed $7 billion (€6 billion) by 2028. The condition, which affects as many as 500,000 people worldwide, often leads to severe breathing difficulties and heart failure. Atxa aims not only to halt progression of the disease but to reverse it.

The company was briefly led by Dr Ivan Coulter, the founder and former chief executive of Sigmoid Pharma (now Sublimity Therapeutics), before he left to establish Eden BioPharma earlier this year.

It has previously secured funding support of more than €3.5 million from a number of sources, including Science Foundation Ireland, Enterprise Ireland and the EU’s Horizon 2020 scheme.

Atxa, which is based at the Conway Institute at UCD, has big ambitions with Ms Kinsella targeting global sales of $750 million (€643 million) by 2030, at which point it hopes to be employing about 160 people locally. The company, whose chairman is former Forest Laboratories general manager for Ireland Dermot Burke, currently employs eight people.

“Funding is always a challenge but we’re extremely focused and clear about what our ambitions are and I’m extremely optimistic that we will secure the financing we need,” Ms Kinsella said.