Two-day event sponsored by GameStop will include eSports, cosplay and YouTube stars 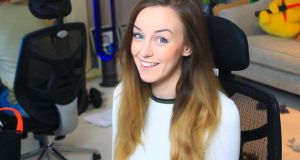 YouTube star Clare Siobhán is one of the guests at GamerCon, at the Convention Centre in Dublin this weekend

Games fans are expected to head to the Convention Centre in Dublin this weekend as the inaugural GamerCon kicks off on Saturday.

The two-day event will host everything from eSports competitions and cosplay events to YouTube stars and the latest in games technology.

The event is being sponsored by GameStop, with HP branding the main stage and Xbox and PlayStation also on board.

Among the YouTube stars attending the event on both days are UberDanger, Ali-A, Clare Siobhán, the AR12Gaming collective and JeromeASF. Fans can pay for VIP tickets to meet and greet their favourites, while Irish band All Tvvins will close the show on both days.

The winner of the cosplay competition will walk away with a €1,000 top prize; there are five eSports competitions to take part in, too, each with a cash prize pool. The League of Legends competition has the largest, at €4,000, but players in the Counter Strike: Global Offensive competition stand a chance of sharing €1,400, while Street Fighter V and Rocket League have €800 each.

“There were a couple of conventions here, but nothing on the same scale as in the US,” he said.

The eventual plan for GamerCon is for it to become a Europe-wide event, with plans to expand it to cities such as London.

1 ‘No demand... because there are no people’ at well-known Dublin pub
2 Nearly 30,000 could lose pandemic payment if they do not confirm eligibility
3 Stripe lures Dhivya Suryadevara from General Motors to be CFO
4 German investor pays €60m for Dublin 2 office block
5 Food traceability company Identigen acquired by MSD
Real news has value SUBSCRIBE