Uber still sees Lyft in the rear-view mirror – but for how long? 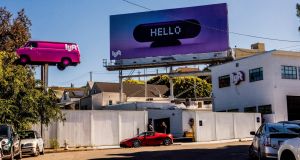 Lyft: a driver hub in San Francisco, the city where the ride-hailing service is based. Photograph: Christie Hemm Klok/New York Times

Uber is losing ground in the United States, its biggest market, to a rival once written off as a bit player, as the ride-hailing company grapples with a series of crises that includes the temporary absence of its chief executive.

A shift among consumers to the San Francisco-based company Lyft is taking its toll, with Uber’s US market share dropping from 84 per cent at the beginning of this year to 77 per cent at the end of May, according to data from Second Measure, a research company that uses anonymised credit-card data.

Uber’s global sales are still growing, with first-quarter revenue surging to $3.4 billion, three times as much as a year earlier. But its growth rate in the US is slowing, and investors have become concerned that a period of crisis has left its top ranks in disarray. Last week Uber, which is valued at $62.5 billion, tried to reassure investors by sharing new projections for growth.

“Investors are worried that Uber may be self-destructing to some extent,” said Santosh Rao, head of research at Manhattan Venture Partners. “At such a high valuation it was priced for perfection.”

Scandals at Uber – involving allegations of sexual harassment, the mishandling of the medical records of a rape victim, and a lawsuit over theft of trade secrets – have dented the company’s image and led to a string of senior departures. Travis Kalanick, its chief executive, went on leave last week without naming a replacement, with a statement after a special board meeting saying the company would be run in his absence by 14 executives.

Uber’s fall in market share was fuelled by the #DeleteUber campaign, which encouraged users to stop using the company because of Mr Kalanick’s role on President Donald Trump’s business advisory council. The campaign hit hardest in New York, Boston and San Francisco.

Lyft, which is valued at $6.9 billion, has expanded into 150 new cities this year and has seen its user numbers boosted by the fallout from Uber’s woes. But it remains by far the underdog, with last year’s revenue of $708 million just one-ninth of Uber’s.

Although Uber has long dominated its home market, it has faced tough competition around the world from companies like Ola, in India, and Grab, in southeast Asia.