Data Chemist technology allows connections in data to be mapped 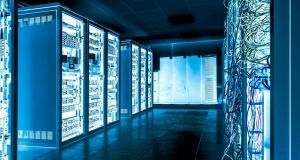 “The world of data is in upheaval because existing technology does not work,” says Data Chemist chief executive Kevin Feeney. Photograph: iStock

A Trinity College spin-out has developed technology to allow companies to make sense of masses of data often lying uselessly filed in a disorganised manner.

The company, Data Chemist, has just raised $1.2 million (€1 million) to develop its platform to “full maturity”and fund what it hopes will be sharp international growth. Atlantic Bridge University Bridge Fund has led the funding round and its partner, Chris Horn, will join the company’s board.

The funding round was also supported by Enterprise Ireland. Trinity College retains a 5 per cent stake in the business alongside the company founders.

“The world of data is in upheaval because existing technology does not work,” says Data Chemist chief executive Kevin Feeney.

“We are trying to grow very fast. We would aim, within 18 months, to have been back in the market for up to 10 times the amount we have raised in this round.”

The company also hopes that rapid development will see it employ as many as 50 people within the next three years.

Speaking to The Irish Times, Dr Feeney said: “Machine learning is very trendy just now but people tend to focus on the sexy stuff. The more difficult stuff is taking existing data and making sense of it.

“We set a structure of what the data should look like and then we work at fitting the data that a client has into that structure.”

Data Chemist is the brainchild of Dr Feeney and Gavin Mendel-Gleason. It had its origins in a €4 million EU-funded international research project on data quality.

The founders started from the premise that organisations generally have reams of data but that it is presented in different, often incompatible formats, is of sometimes dubious quality and is stored in a way where it is practically impossible for an individual to mine it for information that can help companies develop or allow academics use it for analysis.

The secret, says Dr Feeney is spotting patterns. Using machine learning, Data Chemist aims to do that better and quicker than others who are also working in what is a fast-evolving sector.

The focus on connections also helps the company identify records that are not accurate – either by accident or deliberately.

Mr Feeney likens it to working with a big map where the information in the data clusters and highlights patterns of connections. “The strength of the connections sometimes bring these things out,” he says. “You can see by other connections how they should look and if they are significantly different, it raises a flag.”

Dr Horn said the potential market for Data Chemist’s technology was “huge” and global. “The company’s approach to solving the problems of data complexity is both innovative and effective. We are delighted to be on board.

“For companies,” says Dr Feeney, “as the saying goes, it is a case of garbage in, garbage out. A single wrong fact can invalidate an analysis and that has major implications for companies and for academics.”