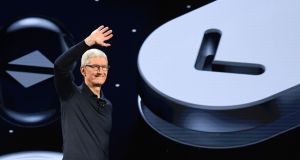 Apple expects to ship 80 million new model iPhones this year, down 20 per cent from what it had planned at the same time last year, Japanese financial daily the Nikkei reported on Friday, citing industry sources.

The California-based firm has asked suppliers to make about 20 per cent fewer components for the three new iPhones it plans to launch in the second half of 2018, compared to last year’s plans for its iPhone X and iPhone 8 models, the paper reported.

The report added to concerns that consumer passion for new editions of the iconic smartphones may be cooling after years of scorching growth, sending shares in Apple and many of its major suppliers lower and weighing on global stock markets.

Apple shares headed for their biggest percentage drop since April, falling as much as 2 per cent at one point.

“This news needs to be viewed in the context of Apple probably being overly optimistic last year in relation to the prospects for its new phones, leaving it with excess inventory in the first part of this year,” Atlantic Equities analyst James Cordwell said.

“At least part of this lower order forecast probably relates to Apple just being a little more realistic.”

Apple did not immediately respond to a request for comment. – Reuters