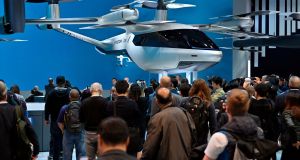 The chief executive of Toyota was on familiar ground when he told CES, the world’s largest electronics show in Las Vegas, that “no one wants a crystal ball as much as the automotive industry”.

But few people guessed his next step: Akio Toyoda announced that the world’s largest carmaker by market value would, in effect, build its own crystal ball close to Mount Fuji: a 175-acre “smart city” powered by hydrogen fuel cells and designed from the ground up for 2,000 residents.

The idea is to give scientists, researchers and Toyota itself “a living laboratory” to observe how residents live a futuristic life with next-generation technology, self-driving automobiles and a host of internet connected devices.

The plans for “Woven City” look wild, ambitious and rather bizarre – all the things that CES’s 200,000 annual visitors have come to expect. “You may be thinking, ‘has this guy lost his mind. Is he a Japanese version of Willy Wonka?’” said Mr Toyoda.

But he said the carmaker needed to be on top of all the megatrends shaping society in the next decades: urbanisation, environmentalism, an ageing society, the power of 5G wireless connectivity and the potential for artificial intelligence to reinvent every consumer device.

Hyundai announced it had teamed up with Uber and would spend $1.5 billion (€1.35 billion) to build flying taxis, while Chinese upstart Byton showed how its 48-inch touch screen dashboard could be used for video conferencing, watching movies and tracking your fitness.

Not to be outdone, Mercedes-Benz parent Daimler, the world leader in luxury car sales under pressure to electrify its portfolio, teamed up with film director James Cameron to create a “living organism” concept car inspired by the film Avatar.

Ola Kallenius, the new chief executive of Daimler, explained appropriately that “tech and auto have merged in the last few years,” but he then spent the bulk of his keynote explaining how the car was an example of how man and machine might “literally merge” and live harmoniously with nature.

When Mr Cameron took to the stage, he made references to the primordial deity Gaia and called the Mercedes-Benz AVTR vehicle “a spiritual idea made manifest.”

For Hyundai, the future belongs to flying cars. It said it would team up with Uber, the ride-hailing app, to build electric self-driving air taxis for big cities.

The two companies said they would conduct test flights this year, and hoped to start commercial operations within three years.

Uber sees the air service, one of the most futuristic aspects of its vision to become the “Amazon of transportation”, as a way to get people out of privately owned cars and into its shared vehicle network. But the regulatory landscape for air taxis remains largely undefined. – Copyright The Financial Times Limited 2020