The arrival of 5G: Everything you need to know but were afraid to ask

For the average consumer, it means faster downloads and more reliable connections 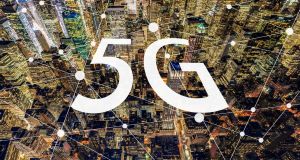 5G is the next generation of mobile connectivity which succeeds the current 4G and older 3G systems. It stands for fifth generation and should deliver faster speeds, more reliable connections and more consistent ones too.

Currently 4G is capable of speeds between 10 and 20Mbps in the real world, while Vodafone claims speeds of up to 225Mbps with its 4G+. But that pales in comparison with 5G, which is capable of connections up to 100 times faster than 4G, currently achieving connection speeds of over 1,000Mbps.

What exactly can we do with higher-speed internet?

We can download movies quicker, or add to our music collection in seconds. We can stream video with fewer hiccups, we can hold a video conference on mobile broadband without the dreaded buffering. There are plenty of possibilities.

None of that may excite you too much; current 4G speeds do video and downloads adequately, and for everything else there’s usually a home or office broadband connection to pick up the slack.

But services are evolving. The amount of data that is being generated keeps growing. Services are using online platforms either in plain sight or working in the background for everything from banking to taxes.

You’d be forgiven for regarding the rollout of 5G with a slightly sceptical look. We’ve heard this all before – 4G was the technology that was going to solve all our internet issues, and we are still at the point where there are more than 100,000 premises in Ireland who do not have access to fast, reliable broadband.

But one other benefit of 5G may be worth noting: lower latency. Latency is the communication delay on the network, the time lag between you sending a command – turn on a light, for example – and the smart home device responding. That couple of seconds may not seem like much on paper, but when it comes to usability, reducing that lag is a major bonus.

In some cases, it could even be an issue of life and death. If self-driving cars are ever going to become mainstream, they will need fast, stable data connections. The response time of the network could mean the difference between a safe journey and a fender bender.

It feels like we are only getting going with 4G, but in reality the technology is old hat. It got its mainstream introduction in 2010, and came to Ireland in September 2013, when Meteor and Eir opened their services to customers. They were followed by Vodafone a couple of weeks later, with Three Ireland getting going the following January.

The introduction of 4G certainly was billed as a great thing for consumers, with faster data speeds opening up new opportunities for work and entertainment. 5G, on the other hand, is mainly about business.

At least, it will be initially. It makes sense that there will be a trickle-down effect for consumers. Faster speeds and lower latency for businesses mean faster responses and better services for consumers, even if they aren’t using 5G themselves.

So will 5G deliver a world of connected devices, from the home to the car?

There are plenty of applications for faster, more stable networks, but there are some areas that are emerging as the perfect test bed for the updated technology. As previously mentioned, it is considered essential for the rollout of autonomous cars, while artificial intelligence and machine learning will also benefit from the technological and connectivity benefits 5G can bring.

A few short years ago, the idea that everything from your car to your doorbell to your cat’s litter box would be connected to the internet may have seemed laughable. But everything is going online these days as sensors swap information, machine learning makes things more efficient and technology is integrated into people’s daily lives.

Look around your home. Chances are you have an internet-accessible alarm system, perhaps with security cameras that you can look in on from time to time to keep an eye on your home.

You may have some wifi-connected bulbs or smart plugs that link into your home broadband so you can control appliances outside the home.

There’s more to come. By 2020 almost 31 billion devices are expected to be connected to the internet, with that figure rising to 75.4 billion by 2025, according to Statista.

There are already far more devices than people currently online.

When will it arrive?

We’ve already seen 5G networks in action. The 2018 Olympic Winter Games in Pyeongchang saw the deployment of a 5G network as the result of a partnership between telecoms firm KT, Intel and Samsung.

Broadband company Imagine said it will offer 5G services to rural customers. Like 4G, it will take a while to get the 5G network up and running. And like 4G you can also expect the arguments over the use of the term 5G to apply to services, and a debate about “proper” 5G.

While things will get off to a start this year, it may take some time for services to spread around the country. If past performance is any indicator of the future, the country is unlikely to be evenly blanketed in 5G connectivity shortly after the networks launch their various services. But it is in rural areas where the need for the services is urgently needed – areas where 4G and 3G have failed to adequately cover the population, and high-speed broadband services are still at the whim of the theoretical National Broadband Plan.

That may be an issue though. Although the conditions of licences issued to Irish operators require telecoms firms to cover a certain proportion of the population, communications regulator ComReg is still to consult with the market on what those levels will be. In the past, it was between 70 and 90 per cent of the population, depending on the service; that means blackspots for mobile signal remain around the country. If the same thing applies to 5G, not only with rural citizens be potentially left without coverage, but it will leave holes in the network on which autonomous cars and other smart technologies are expected to depend.

Then there will be the task of persuading people to sign up for the new networks. While the next generation of mobile networks aren’t specifically designed with consumers in mind, networks will want to get their customers signed up to plans at some point.

So is there anything I need to do?

The new 5G networks will not only require new infrastructure, but it will also need new phones that can work with the networks; your current iPhone, for example, doesn’t support 5G. That may discourage consumers from jumping on the bandwagon too early.

Samsung had only unveiled the the new S10 when it effectively made it obsolete by announcing the 5G version of the phone would launch a couple of weeks later. That was followed by Huawei with its 5G Mate X, and phones from LG and Chinese mobile maker Xiaomi.

But that is jumping the gun a little. The next stage is to build the network infrastructure. There are a number of companies that will be instrumental in the rollout of 5G networks worldwide. Nokia, Ericsson and Huawei are the top three equipment providers for networks, and it is likely that the global networks will be built at least in part on their products.

So it is smooth sailing to a 5G future?

Already Huawei has run into some roadblocks. The United States has banned the company from being involved in certain networks, amid allegations that its equipment could be used to enable Chinese spying, and has tried in recent months to recruit allies to its point of view.

It is a charge that Huawei emphatically denies, but Australia joined the US in effectively barring Huawei from 5G; in New Zealand, it is under review. In Germany, the law on the security standards for telecoms operators bidding to participate in the country’s 5G networks is being tightened up. But the United Kingdom has said it is open to Huawei’s involvement in 5G.

So 5G has a few issues to iron out?

Well, there is one big concern about the introduction of 5G: privacy. In the US, security experts have been raising concerns about how the technology could make it harder for users to conceal your exact location. The Wall Street Journal outlined the concerns, noting the current iteration of mobile phone towers make it more difficult to pinpoint your exact location. Triangulation can do a decent job of narrowing things down but the 4G towers themselves generally cover a wider area than the new 5G towers. And remember, it will not just be your smartphone: in the connected age all sorts of devices will be feeding back your data via the new 5G connections.

And that brings us to another growing issue: the amount of your personal data 5G will help third parties collect. In a world where more devices and more people than ever before are connected to the internet, it’s not only the risk of hackers we need to worry about, but also who exactly has control and access to the vast and growing bank of data profiles of citizens being fed via 5G and the various devices attached to it. This may be a more thorny issue to tackle than even the infrastructure.

1 Just 8,000 houses built last year offered for sale on open market, says CIF
2 Russian oligarch tees up €85m sale of Dublin’s Morrison Hotel
3 How can I view my dead brother’s will if I’m not the executor?
4 Point Square set to hit market for €100m in September
5 Politics more hazardous to economy than Brexit or coronavirus
Real news has value SUBSCRIBE