TenderScout sets up shop in US, UK and Canada 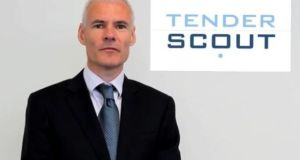 TenderScout, the Irish online platform that helps firms procure government tenders, has announced its expansion into the US, UK and Canadian markets.

The Enterprise Ireland-backed firm, founded by businessman Tony Corrigan in 2010, said it made the decision to establish a presence in San Francisco, London and Toronto following a surge in business since testing the market remotely earlier this year.

The company recently scooped the grand prize at the annual Eir Spider digital technology awards – the first time that a start-up has won top prize.

TenderScout collates competitive intelligence to help companies take a strategic view of tendering and understand quickly whether they should go for a certain tender, and supports them in the ones considered achievable based on the data provided.

“A huge part of our offering, is being in a position to tell clients when not to go forward for a tender. In 2016, an estimated €143 million was spent writing proposals for government tenders in Ireland, ” Mr Corrigan said.

However, our analysis shows us that 60 per cent of those proposals were guaranteed to lose, due to SMEs’ inability to qualifying the tender as suitable for them,” he said.

“Eliminating unqualified businesses from competing for a tender frees up government resources when evaluating proposals, and provides government with SMEs that deliver better value for money.”

In 2016, TenderScout helped more than 200 tenderers win more than €100 million worth of contracts.