Cantillon: Is your activity tracker on its last legs?

With Fitbit snapping up Pebble for a song, time could be running out for wearable tech 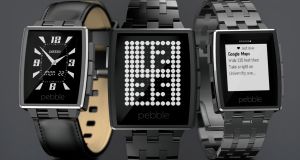 Pebble’s smartwatches will soon be consigned to the vault of history, while Nike and Motorola have already ditched their wearables, and Apple is keeping sales of the Apple Watch close to its chest.

As the Christmas shopping frenzy gathers pace, tech firms are understandably worried about whether the much-hyped growth in wearable tech has run out of steam. Recent moves in the market would indicate that there is some sort of tightening going on.

This week, it was the turn of Pebble. The company, which caused a splash with its smartwatches and was a roaring success on crowdfunding site Kickstarter, was bought by Fitbit this week at a knockdown price rumoured to be in the region of $40 million. It’s a far cry from the days when Citizen was pursuing Pebble with a $740 million price tag.

If you’re a Pebble user, your smartwatch is about to be consigned to the vaults of history. Fitbit has picked up some of the Pebble assets – namely its intellectual property and its software – but unsurprisingly didn’t want the company’s hardware.

The problem is that consumers haven’t quite taken to wearable tech as readily as companies had hoped. Google found that out not so long ago when it floated the Google Glass project. Be honest: how many activity trackers have you worn for two months and then thrown in a drawer, never to emerge again? You aren’t alone. One study estimated about one third of wearers abandon their trackers within six months. The novelty of knowing how many steps you take a day wears off, the hassle of remembering to charge it gets too much, and you just give up.

Opinion is also divided about whether activity trackers are actually of any benefit to people. Do they help people lose weight? Not according to a study published in September which found that they were less motivating than a run-of-the-mill diet and exercise plan.

Even those wearables, as Pebble’s experience has shown, aren’t immune to the market forces at work. Motorola said it won’t be making any more of its Moto 360 Android Wear watches for a while at least. And Apple, even though it has claimed some success with its Watch sales, still doesn’t give exact sales figures for the product, which could be interpreted that sales, while hardly disastrous, are not quite as stellar as analysts would expect.

The problem is that wearables are still a niche product, trying to take on mass market ambitions. Until that sorts itself out, you can expect to see a few more Pebbles hitting the skids.