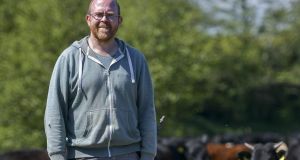 Peter Bryans, the founder of Donabate Dexter, with his heard of Dexter cattle. The company doesn’t use chemical fertilisers or pesticides on grass and the cattle receive only mineral and vitamin supplements

A technology company has repurposed its business-to-business order processing app so that consumers can buy goods from wholesalers, food producers, farmers and independent retailers in a move that can significantly shorten the supply chain and improve margins for the producers who use it.

Unify Ordering was established to allow chefs and those in the hospitality business order wholesale items online with just one app which can track previous orders. As it stands, the system for ordering goods in the sector is quite archaic, with many wholesalers requiring orders to be placed over the phone.

According to Barry McNerney, the company’s chief executive who has also established businesses including Lotts & Co and Juniors Deli and Paulie’s Pizza, the business was “absolutely flying” prior to the Covid-19 pandemic. “In March we processed €5 million worth of orders while 1,500 restaurants were using it to order from 50 official suppliers,” including large suppliers such as La Rousse foods, Mr McNerney said.

When the Covid-19 pandemic shut the economy, the company, whose founders also include Louis Williams of the 250 Square Coffee Group and app developer Paul Lawless, repurposed the app and had to integrate Stripe so as to process payments. Since May 18th, more than 3,000 people have downloaded the app. “This is a whole new way to connect with new suppliers and producers,” Mr McNerney said, adding that “we started selling wholesale goods at wholesale prices and we’re trying to connect independent Irish wholesales, producers and retailers” to consumers.

The app, when it was operating as a business-to-business enterprise was free to customers and wholesalers would pay a fee based on customers numbers. That option still exists while customers buying directly from independent producers and wholesalers pay a transaction fee of 7.5 per cent, lower than other, similar, operations.

Among some of the independent producers offering their wares on the app is Donabate Dexter, a business founded by Peter Bryans which sells premium grass-fed beef. The company, which breeds Dexter cows, doesn’t use chemical fertilisers or pesticides on grass while the cattle receive only mineral and vitamin supplements.

Retailers including Fallon & Byrne, The Butler’s Pantry and Italicatessen are also using the app.