Opinion: Despite Covid-19, students are returning and celebrating with house parties 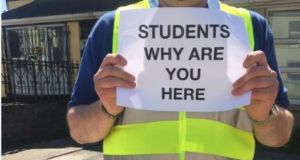 A resident holding a sign protesting at students returning to their rented accommodation in Cork.

As a member of faculty at University College Cork, I take great pride in my institution’s rich contribution to the social, cultural and architectural fabric of Cork city. This is due, in part, to the location of the UCC campus, right on the edge of our city’s centre.

College campuses benefit greatly from such placement, absorbing from and bleeding into the surrounding businesses and communities. Ten minutes after leaving my office, I can be at the English Market’s Sandwich Stall, or Cork Coffee Roasters, just as anyone living or working in town might come up to us to browse the Glucksman or sit in the President’s Garden.

Placed as it is, where the city begins to turn to suburbs, UCC is also surrounded by a great many residential neighbourhoods. For those unfamiliar, the UCC campus is positioned alongside some of Cork’s oldest areas, places like the Lough, Glasheen, the Magazine and Bandon roads.

By “old”, I mean that these places are very Cork, full of characters and memories, local myths and peculiarities. They’re the kind of places where, if you miss, as a child, a sitter in the local street leagues, you will carry that shame into adulthood because nobody will ever forget.

Instead of family homes, you have student accommodation, houses visibly falling into disrepair, grass overgrown and covered in empty cans, windows and lampposts adorned with posters for the Voodoo Rooms

There are people living in these areas who have never known anywhere else, people whose family have been part of the community for generations, people to whom places like Carrigaline or Ballincollig-twenty minutes from the city-seem very distant and strange.

These roads are lined with beautiful houses, big and small, many of them Victorian-style terraces which should comprise one of Cork city’s most charming locales, full of families and university staff, people living and children growing up just a few yards from where they work or might be educated.

But instead of family homes, you have student accommodation, houses visibly falling into disrepair, grass overgrown and covered in empty cans, windows and lampposts adorned with posters for the Voodoo Rooms.

I am not being hyperbolic. I walk down College Road every day, and the lack of care for Cork’s architectural heritage is galling. It is harrowing to see that landlords have allowed such a beautiful part of the city to decay.

And then there are the special occasions, Freshers’ Week, Rag Week, Christmas, when any sense of decorum is seemingly abandoned by thousands of students. It breaks my heart each September to see local residents, many of them elderly, having to deal with hordes of students embark on a programme of alcohol-fuelled carnage.

My office overlooks a house occupied by students: every sunny day, they get their stereo and cans, and have a party on the extension roof until some neighbour calls the Guards. Imagine living next door to that. Would you move? What if you couldn’t afford to? What if you have lived in that area your entire life?

Despite Covid-19 restrictions, students have been returning to rented accommodation in recent weeks and many have seen fit to celebrate with house parties.

Sarah O’Dwyer reports in The Echo that gardaí have responded to multiple incidents concerning such parties over the past fortnight. Videos featuring local residents losing their temper and threatening students are circulating on social media. Residents need to leave public order to the authorities, but one can see why so many sympathise with the locals in question; it must be terribly frustrating to be faced with unrelenting disregard for one’s community, particularly at a time of national crisis.

Residents have now started protesting the return of students, and my sense is that they currently enjoy the general support of the Cork public. The situation is breeding a dangerous sort of local, somewhat urban, exceptionalism. I know some (usually) reasonable people who, tired of having to clean up their streets and get their new-borns back to sleep, would rather “the culchies” just “go home” (I have obviously tempered their expression in this recounting).

Having grown up in Cork city, I can tell you that there is a lot of ill-will towards the university and its student population on account of this issue, and it is a point on which I find it very difficult to defend my institution. Many students enrich the communities through which they pass, and many students have no choice but to return to rental accommodation as the economy reopens.

But until all third-level institutions start addressing antisocial behaviour, the divide between our places of education and the communities they seek to improve will only widen. Sustained tensions will only contribute to an “us versus them” mentality which can, if allowed to develop unchecked, form the beginnings of very problematic thinking and discourse.

Of course, any of the university’s deficiencies are my own, because a university is comprised of the people who work and learn there-as educators, we are utterly failing young people if we can’t teach them common decency. It doesn’t matter what tangible skill one acquires over the course of their degree if they do not also learn how to be a better person.

This situation is a consequence of many socio-economic forces beyond the direct influence of university management, so it’s a very difficult thing to resolve. Shifting all houses in these areas into the possession of owner-occupiers, and building clusters of purpose-built, affordable student accommodation isn’t ever going to happen in a state where greed is an inherent part of the dominant political ideology and wider national identity.

Nonetheless, An Garda Síochána, local residents’ associations, third-level institutions and politicians need to do everything within their power to combat these tensions so that students and local residents might better co-exist.

Dr James O’Sullivan (@jamescosullivan) lectures in University College Cork’s department of digital humanities and is the author of Towards a Digital Poetics (Palgrave Macmillan 2019).