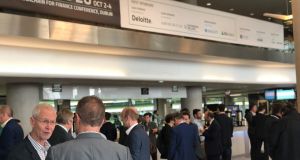 Attendees at the “Blockchain for Finance” conference in Dublin

The Republic’s attempt to build its credentials as a key player in blockchain has received a boost with news that an international body working to develop standards around the technology will host a conference in Dublin next year.

Details of the International Organization for Standardization (ISO)’s meeting next May were announced by Minister of State at the Department of Finance Michael D’Arcy at the “Blockchain for Finance” event here last week.

The ISO is an independent, non-governmental body based in Switzerland that has 162 member countries. Its technical committee is in the process of developing standards for the much-hyped technology, which underpins cryptocurrencies such as bitcoin, etherum and ripple.

Terry Landers, chairman of the National Standards Authority of Ireland’s ICT consultative committee, described the decision to host the blockchain event in Dublin, as a “major coup”.

“We’re expecting about 200 people to attend and are planning several outreach events to coincide with it to share expertise with policymakers, small enterprises and so on,” said Mr Landers, who is also chief standards officer for Europe Middle East and Africa (EMEA) at Microsoft.

Mai Santamaria, a senior financial director at the Department of Finance, who recently wrote a discussion paper on virtual currencies and blockchain, also described the decision of the ISO to hold an event in Dublin as a major development placing Ireland on the map.

Blockchain technology, which store blocks of information that are distributed across a network, is seen as a major breakthrough as they bring about high levels of traceability and security in online transactions.

While most commonly associated with cryptocurrencies, blockchain is also expected to affect digital services, and to transform business models in a wide range of industries .

Ireland has a growing number of indigenous and multinational companies operating in the blockchain space. These include Aid:Tech, ArcNet, Cirlce First Data and ConsenSys, a company established by Joe Lubin, co-founder of bitcoin rival ethereum.

Deloitte has a dedicated blockchain laboratory in Dublin while Mastercard recently announced plans to hire a number of experts in the technology for its Leopardstown-based facility.

Eoin Fitzgerald, a senior development adviser in fintech at Enterprise Ireland, said the Republic could become a major player in blockchain but warned that recruitment issues could impact our progress. “We’ve so many companies fighting for talent here currently and this I think is the biggest challenge we face over the next few years,” said Mr Fitzgerald.