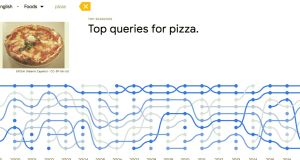 Searches for pizza rose from 2003 to 2008, and have remained more or less steady ever since

When Google’s search engine debuted 20 years ago it had a relatively easy job in comparison to the vastness of the web today: there were only 25 million webpages or the equivalent of the sum of books in a small library, says Ben Gomes, VP of Search for Google News and Assistant. Today Google indexes hundreds of billions of page, which Gomes explains is more information than that contained in all the libraries in the world combined.

To celebrate two decades of Googling, Google’s artist in residence Cyril Diagne created 20 Years of Search, an interactive visualisation that allows you to see popular searches according to year and when crazes like Pokemon have waxed and waned, for example.

Obviously this visualisation doesn’t encompass everything Google indexes, but it has a wide selection of topics, with categories including animals, actors, books, films, foods. For example, searches for pizza rose from 2003 to 2008 and have remained more or less steady ever since, while our curiosity about tea seems to rise and fall periodically.