Exercise tracking, heart monitor and fall detection – all on a bigger screen 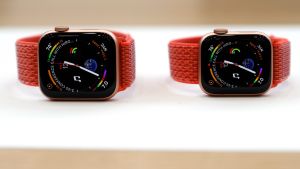 The Apple Watch has largely looked the same for the past few years. After its initial launch in 2015, the updates largely focused on adding functions such as built-in GPS, LTE connectivity, bumping up the water resistance rating and adding sensors to measure how many flights of stairs you’ve climbed. It has been a gradual improvement from Series One, and each one has had its own benefits.

So why would you consider buying the Series Four? Here’s why: it’s Apple’s best Watch to date.

So far, so “duh”. Manufacturers don’t usually go backwards when they release a new device, or what would be the point? The Series 4 builds on some of the Watch’s strong points and shores up some of its weak spots.

Apple has tweaked the display, making it bigger but also slimming down the bezels so you get more display for a relatively small bump in case size. Instead of a 38mm and 42mm option, you have a choice of 40mm and 44mm. That extra couple of millimetres gives you the space for watch faces with more information included in them, so less need to prod at the watch face and venture into the dock or the apps home screen.

You didn’t buy the Apple Watch for the ability to play mini games while you waited for the bus. You bought it because it could give you notifications from your phone, plus it had some decent health features that you could use with minimal effort on your part.

Series 4 still has everything you’d expect – water-resistant, built-in GPS, automatic exercise tracking, heart rate monitor – but now it has some extra features. For example, it will now monitor you for high or low heart rates, and alert you. All the information is recorded in the Apple Health app, so when you inevitably forget the details in the doctor’s surgery, you will have exact information to hand.

At some point in the future, that will be supplemented with an ECG app. Apple has built sensors into the Watch that make it equivalent to a single-line ECG. It won’t replace a proper examination by a doctor, and nor is Apple claiming it will, but if something feels off, at least you can go to a doctor armed with the necessary information.

There is fall detection too, which is handy for older members of the family if you can persuade them to wear an Apple Watch. It’s automatically shut off for users under 65, but you can manually enable it in the watch’s options. It detects the particular movements associated with falling, and if there is no movement within a certain time, it will set off the SOS alert – enough to wake you if you’ve just fallen asleep in an odd position – and alert emergency contacts if that doesn’t shift you. As alarms go, it’s hard to ignore, so there is no real worry that you could trigger it accidentally.

I’ve never been a massive fan of talking to people on my watch, with the one exception being using it in the car. Apple has made the speaker louder, and shifted the position of the microphone to the other side of the case to stop any interference from the speaker impacting on call quality. It makes it a much more useful feature – but again, something I’ll be using in limited circumstances. If you live in a country where esims are supported and are more likely to use the Watch’s LTE functionality, this will be a much more welcome move.

The battery hasn’t changed in terms of how long it lasts. Apple says 18 hours, aiming for all day and charging overnight. But in practice, I was getting a day and a half between charges. It doesn’t exactly leave you daring to take long trips away from home on a whim (and minus a charger) but it does mean you can wear it overnight, track your sleep, and still get through a good chunk of the next day before you finally have to give it some power. It’s all about what’s more important to you – sleep tracking or daytime use.

The good The display may not have increased by much, but it’s enough to give you extra space for extra information on the watch face, meaning you poke at the digital crown that bit less. While Apple needs to make some changes to make the crown easier to use, the less time you need to jab at a small screen, the better.

The not so good Battery life hasn’t been improved significantly, meaning it will lag behind the Samsung Galaxy Watch – assuming that lives up to its promises – which claims a few days of battery life before you have to recharge.

One of the Watch’s most compelling features from a health point of view still isn’t available, with the ECG functions coming in a later update. The US gets it first; there’s no official date for Ireland yet.

The rest The Watch may have a bigger display, but those straps you’ve been building up in the past couple of years will still fit the Series 4. One area where it’s not compatible? Charging. The iPhone may have gone wireless with Qi charging, but the watch still needs its special charger – you can’t throw it on your phone charging pad, walk away and come back to a fully charged device.

The verdict If you’ve been holding out on the Apple Watch just in case, the Series 4 has been worth waiting for. A longer battery and proper wireless charging would push it to perfect.

1 Who are Ireland’s 17 billionaires?
2 My father in a nursing home wants to gift me his house
3 Are there annual limits on inheritances or gifts to a child?
4 Irish whiskey sales slow in US but distillery visitors top 1m locally
5 Dublin office vacancy rate hits lowest level in 20 years
Real news has value SUBSCRIBE