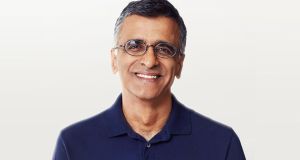 Sridhar Ramaswamy who is soon to depart Google to join Greylock Ventures.

He’s been considered the most important person worldwide in online advertising. Now he’s moving on, but Google’s Sridhar Ramaswamy says there is plenty to play for in what is a fast-growing sector.

And he certainly doesn’t buy into the storyline of Google as the unassailable dominant player in the sector.

Since joining Google 15 years ago, Ramaswamy has played a key role in growing its adverts and commerce products division from one delivering $1.5 billion in revenue into a $100 billion-plus a year business. But asked if the internet giant has gotten too big for its boots and should be split up, Ramaswamy claims that even the mighty are vulnerable.

“Future success is never guaranteed. There is a tonne of competition out there and it can come out of nowhere,” he says.

You’d hardly expect him to say otherwise, particularly with regulatory authorities continually breathing down Google’s neck. But speaking to The Irish Times in Dublin recently, Ramaswamy strikes something of a dour note when discussing the future. Even more so, when outlining the opportunities and threats to online advertising, upon which much of Google’s fortunes depend.

As senior vice-president of the company’s adverts and commerce products, Ramaswamy has led a rapidly-growing business which include search, display and video advertising, analytics, shopping, payments and travel.

Given the company’s dominance in this space, it might seem surprising to learn that Ramaswamy keeps looking over his shoulder to see how the competition is doing. But he claims Google has serious rivals in practically every area in which it operates. Nothing can be taken for granted.

He reels off a list of competitors that includes Apple and Microsoft. He also namechecks Amazon, which has been causing disruption in several segments, including online advertising.

“Amazon has become a major ads player over the space of just two years,” he says, referring to an industry in which Google and Facebook have long reigned.

He’s not wrong. Research firm Emarketer earlier this year forecast that the combined US digital advert market share of the two tech giants would fall in 2018 for the first time. That’s in a year when spending is expected to grow by nearly 19 per cent to $107 billion, led by the likes of Amazon and Snap.

Still, given that Google would still be left with a near 40 per cent share based on these projections, while Facebook would have 17.1 per cent, it seems unlikely that the digital duopoly is about to disappear anytime soon.

It isn’t just Amazon that concerns Ramaswamy though. He suggests future growth in digital advertising is at risk due to increased use of ad-blockers on the back of consumer distrust. This he says has huge implications, not just for advertisers but also for publishers.

Ramaswamy, who announced earlier this week he is leaving Google to become a partner at Greylock Ventures, is concerned about the future of online advertising as a whole.

“Overall, I think that advertising has had a positive impact. But it is clear today that there are also a number of concerns about user trust and that is a pretty significant problem,” he says. “Trust has become a slippery point, a big issue. When it comes to data, people are unsure about how their browsing data is being used. They have become annoyed by experiences of ads that follow them around the internet . . . It is a big problem and something that the advertising industry needs to think about.”

Ramaswamy, whose role at Google is to be filled by Prabhakar Raghavan, previously the company’s vice-president of apps for Google Cloud, says that one of the worst consequences of ad blocking is that it blocks the bad and good and reduces revenues for publishers.

He is critical of Apple and Firefox for including ad blockers with their browsers and rules out doing something similar for Google’s Chrome even if many users might want it.

“Things like what Apple and Firefox are doing can also get in the way of safety. And this is all the more reason why the ad industry needs to focus on issues users are grappling with and have solutions they are happy with,” says Ramaswamy.

The advert industry is working together to deal with issues of trust, he says, citing the recent rollout of better standards. But he concedes that more needs to be done.

“There is progress being made but ad blockers are coming at an even faster pace and that is the challenge. It isn’t clear how much time we have,” he warns.

1 In this strangest of recessions, what happens next for Ireland?
2 Chris Johns: Boohoo exposed on pay and conditions in digital economy
3 Hotel bookings collapse in wake of additional Covid restrictions
4 ‘Working remotely requires more individual contact, not less’
5 Air travel never going ‘back to way it was’
Real news has value SUBSCRIBE