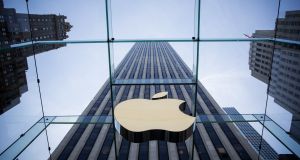 The Apple case is the biggest of a wave of investigations that has ordered dozens of companies to repay billions of euros over tax rulings that the EU says were unfair. Photograph: Eric Thayer/Getty Images

Apple has completed the transfer of €14.3 billion into an escrow fund established by the State at the direction of the European Commission in a row over alleged state aid.

The US tech giant completed the transfer at the beginning of September, the Department of Finance said. The State had committed to recovering the money by the end of the third quarter of this year.

The total payment from Apple includes the principal amount of €13.1 billion plus European Union interest of about €1.2 billion. The recovery of the funds announced today was hailed by the department as a “significant milestone”.

“While the Government fundamentally disagrees with the commission’s analysis in the Apple state-aid decision and is seeking an annulment of that decision in the European courts, as committed members of the European Union we have always confirmed that we would recover the alleged state aid,” Minister for Finance Paschal Donohoe said.

“We have demonstrated this with the recovery of the alleged state aid, which will be held in the escrow fund pending the outcome of the appeal process before the European courts,” he added.

The Apple case is the biggest in a wave of investigations that has ordered dozens of companies to repay billions of euro over tax rulings that the EU says were unfair.

The Government missed an original deadline of January 2017 to collect the money from Apple, as the logistics of setting up the biggest and most complicated escrow account in the history of European state aid cases dragged on.

That resulted in the commission announcing its intention to launch infringement proceedings against the Republic over the recovery of funds.

A commission spokesman said on Tuesday that the commission welcomed the payment which “removes the distortion of competition” while it awaits the final judgment of the EU courts.

In light of the payment, competition commissioner Margrethe Vestager will propose “to the college of commissioners the withdrawal of this court action”, the spokesman said, referring to the infringement proceedings.

The commencement of payments in May followed the signing of a legal agreement between the Government and the US tech giant on how the escrow account will be handled. Rather than transferring cash, Apple moved bond investments, which require careful management while they are held in the account.

Investment companies Goldman Sachs, Amundi and BlackRock had been selected in March to manage the back taxes and interest as the funds are held in escrow. BNY Mellon was picked earlier this year to provide custodian and escrow services in relation to the alleged Apple state-aid recovery process. It will oversee the work of the three investment companies managing the funds.

On Tuesday, the department noted that, while the case has been granted priority status and is therefore progressing through the stages of private written proceedings, “it will likely be several years before the matter is ultimately settled by the European courts”.

1 Why gift a son now if it eats into his tax-free inheritance threshold?
2 Dublin council puts Unicorn restaurant demolition plan on hold
3 Can we finally say farewell to the scourge of hot-desking?
4 Deloitte was top Irish dealmaker in first half of this year
5 Dispute over €2.95m sale of Georgian property struck out
Real news has value SUBSCRIBE