NTMA understood to be involved in effort to recover Apple taxes 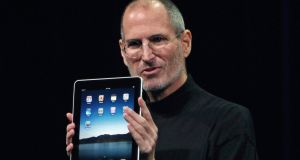 Apple is preparing to pay a massive interest bill into an escrow account in addition to €13 billion of back-taxes the European Commission says is owed to the Republic after finding last year the iPhone maker’s Irish tax affairs breached state-aid rules. feqr

Having missed an initial deadline on Tuesday for the collection of the taxes and interest, even as Ireland and Apple are appealing the EU decision, State officials are seeking to finalise the matter within weeks with the technology company.

Accountancy firm Grant Thornton estimated in August that the interest cost alone could run to €6 billion, based on rates applied by the Revenue Commissioners. However, sources said that the figure will be lower, and calculated according to a less onerous state-aid recovery rate formula.

It is understood the National Treasury Management Agency will play a role in the collection of the money, given the size and complexity of the transaction. However, control of the funds will ultimately be the responsibility of a trustee, as the case winds its way through European courts, a process which could take up to six years.

The sheer amount involved means the funds cannot merely be transferred into a bank account. The money will have to be actively managed, according to sources, most likely along the lines of how Apple runs its own cash hoard, which grew to a record $237.6 billion at the end of its financial year in September.

Only €20.5 billion of Apple’s overall pool is made up of actual cash or cash equivalents, according to the latest annual report. The remainder is invested in corporate bonds, US and other government debts as well as mortgage- and other asset-backed securities.

The group’s effective interest rate the entire portfolio last year was 1.73 per cent.

A spokesman for the Department of Finance said that while Ireland missed last Tuesday’s initial deadline for collecting the Apple taxes and interest, the European Commission is satisfied with progress that has been made by the State and Apple on the matter. He declined to comment further.

It is understood the payment will be made soon. Firstly, the Revenue Commissioners must align the EU’s formula of how much tax is owed between 2003 and 2014 with Irish tax law.

An EU Commission spokeswoman said Brussels remains in contact with Irish authorities on the matter. A spokeswoman for Apple declined to comment.

Meanwhile, it emerged on Friday that Apple’s chief executive, Tim Cook, received the equivalent of $145 million (€137.3 million) in the year to September as he was given $137 million of previously-awarded share bonuses tied to his 2011 promotion to the top job.

His actual remuneration for last year fell by $1.5 million to $8.75 million as the group missed its own sale and profit targets.

Mr Cook this week declined an invitation to appear at the Oireachtas finance committee to discuss the EU ruling. Apple told the committee it didn’t want to “potentially prejudice future outcomes” of the case.

The decision not to give testimony drew criticism from a number of TDs, including Fianna Fáil finance spokesman Michael McGrath and his Sinn Féin counterpart, Pearse Doherty, as well as the Labour Party’s Seán Sherlock.