Weblog: If you can bear the noise of chewing, there’s plenty of food for thought here 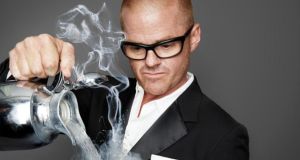 Positioning itself as “the world’s first multi-sensory podcast”, Heston Blumenthal’s new Pod & Chips is an aural delight for foodies. Famous for his experimental gastronomic style, Blumenthal is also keen to push the medium of sound as a way of enhancing culinary experiences.

His episode called “How to eat with your ears” explores the role of soundwaves in making food taste better by using sounds that evoke memories. His food of choice is a humble yet satisfying childhood staple: fish fingers. Part of the process, apparently, involves Heston eating a frozen cod fishfinger right into the microphone, which will upset anyone who experiences misophonia (an intense dislike of certain sounds, such as people chewing food). I am one of these people and was not impressed with the moist lip-smacking.

As long as you are willing to endure a bit of rambling and a few digressions from Blumenthal, there are nuggets of information on the restaurant industry, food history and so on. On to the sensory part: we are told that enjoying fish and chips while feeling, smelling or hearing the newspaper in which it used to be wrapped will bring us back to childhood. I’m not sure I can take more of his munching into the mic, though.