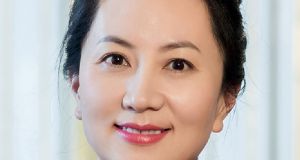 Chinese telecoms giant Huawei’s chief financial officer Meng Wanzhou has been granted bail by a Canadian court 10 days after her arrest at the request of the US authorities, while China has detained a former Canadian diplomat in Beijing.

The US alleges that Ms Meng, who is the daughter of Huawei’s founder Ren Zhengfei, misled international banks about transactions connected to Iran, putting the lenders at risk of violating American sanctions on selling technology to Iran.

A court in Vancouver granted Ms Meng C$10 million (€6.6 million) bail and said she must wear an ankle monitor and stay at home between the hours of 11 pm and 6 am. There was cheering in the courtroom when the decision was announced.

Five of her friends put their houses up as guarantees and other money to pledge she will not flee.

The next stage is the Canadian courts must rule if the case against Ms Meng is strong enough to extradite her to the US. In that event, she would face charges of conspiracy to defraud multiple financial institutions, with a maximum sentence of 30 years for each charge.

Huawei is the world’s biggest supplier of telecommunications network equipment and second-largest maker of smartphones.

US president Donald Trump raised the possibility of intervening in the case to avoid further tensions in relations with China.

Earlier this month, China’s president Xi Jinping and Mr Trump agreed to a ceasefire in their bitter trade war. The two leaders said they would delay a planned January 1st increase in US tariffs to 25 per cent from 10 per cent on $200 billion (€177 billion) worth of Chinese goods to allow more time to negotiate a deal.

“If I think it’s good for what will be certainly the largest trade deal ever made - which is a very important thing - what’s good for national security , I would certainly intervene if I thought it was necessary,” Mr Trump told Reuters.

Michael Kovrig has been working for International Crisis Group since February 2017 and the reasons for his detention were not clear.

“We are doing everything possible to secure additional information on Michael’s whereabouts as well as his prompt and safe release,” International Crisis Group said in a statement.

Prime minister Justin Trudeau said Canada was in direct contact with Chinese authorities about the case.

Mr Kovrig worked as a diplomat from 2003 to 2016, including postings in Beijing and Hong Kong.

China summoned the Canadian ambassador in Beijing on Saturday and warned of “severe consequences” if Ms Meng was not released.

1 Pepsi-Cola to build second factory in Cork with potential for 250 new jobs
2 Covid-19 has shown that much of ‘normal’ life should have been binned years ago
3 ‘It’s fantastic living here – in the gateway to Asia’
4 Budget 2021 main points: Up to €5,000 a week for Covid-hit firms, hospitality VAT rate cut
5 What does it mean to shop local in Covid-19 era?
Real news has value SUBSCRIBE