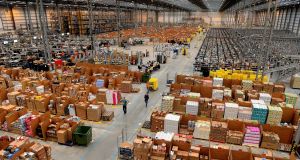 “We have reached an overall settlement agreement with the French authorities on past questions,” an Amazon France spokeswoman said. Photograph: Andrew Yates/Getty Images

Amazon said on Monday it had settled a long-running dispute with French tax authorities, who have been seeking nearly €200 million from the online retail giant.

Neither Amazon nor the French authorities would say what the settlement was worth.

Amazon first acknowledged in 2012 that the French government was seeking back taxes, interest and penalties for the fiscal years from 2006-2010 in relation to “the allocation of income between foreign jurisdictions”.

“We have reached an overall settlement agreement with the French authorities on past questions,” an Amazon France spokeswoman said.

Amazon has in the past been criticised for minimising its tax bill in France and other European countries by channelling sales through Luxembourg, which offers tax breaks to foreign companies which base themselves there.

It said that it had set up a branch in France in 2015 and now booked retail sales, charges and profits in the country.

The French government has opened the door to negotiating settlements in long-running tax cases after it lost a court case against Google last July.

A French court ruled that Google was not liable to pay €1.1 billion in back taxes demanded by the French authorities as the company did not have sufficient taxable presence in France.

Since then the French government has also been pushing hard at EU level for new rules to tax online companies based on their revenues, rather than only on their profits at present.

Such companies are often taxed on profits booked by subsidiaries in low-tax countries like Ireland or Luxembourg, even though the bulk of their sales comes from other EU countries.

Separately, EU competition regulators told Luxembourg in October to recover about €250 million in back taxes from Amazon, accusing the country of giving illegal tax benefits. Luxembourg has lodged a legal challenge against the move. – Reuters

Covid-19: Small businesses are left as cannon fodder in our zealous anti-virus experiment

Ireland stands to benefit in a big way from investing in public transport 05:02
Michael Smurfit: ‘I asked Trump to invite me to the White House for my 80th birthday’ 05:00
‘I’m so lucky to be in the Caribbean – a million miles from Derry Girls’ 05:00
Covid-19: Small businesses are left as cannon fodder in our zealous anti-virus experiment 05:00
Coronavirus pandemic shows how fragile employment can be 05:00

1 ‘I’m so lucky to be in the Caribbean – a million miles from Derry Girls’
2 Michael Smurfit: ‘I asked Trump to invite me to the White House for my 80th birthday’
3 Enforcement proves the Achilles heel for GDPR
4 Revenue fears fraudsters tapped bank details of 3,000 taxpayers
5 Ireland stands to benefit in a big way from investing in public transport
Real news has value SUBSCRIBE