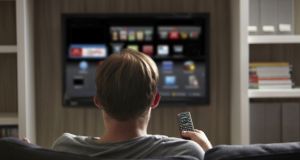 Researchers found that a number of smart TVs, including those made by Samsung and LG, and the streaming dongles Roku and Amazon’s Fire TV, were sending out data. Photograph: iStock

The smart TVs in our homes are leaking sensitive user data to companies including Netflix, Google and Facebook even when some devices are idle, according to two large-scale analyses.

Researchers from Northeastern University in the US and Imperial College London found that a number of smart TVs, including those made by Samsung and LG, and the streaming dongles Roku and Amazon’s Fire TV, were sending out data such as location and IP address to Netflix and third-party advertisers.

The data was being sent whether or not the user had a Netflix account. The researchers also found that other smart devices including speakers and cameras were sending user data to dozens of third parties including Spotify and Microsoft.

The findings are likely to heighten concerns about the privacy of user data on the internet just as smart devices, including televisions, are flooding homes.

In a separate study of smart TVs by Princeton University, researchers found that some apps supported by Roku and Fire TV were sending data such as specific user identifiers to third parties including Google.

1 How to avoid a communication breakdown
2 How much state pension will I get next year?
3 Brexit to curb services trade with UK, accountants group warns
4 PTSB plays down Ulster Bank talk as it sells €1.4bn of loans
5 Am I crazy to consider switching to an Ulster Bank mortgage?
Real news has value SUBSCRIBE