Galway-based medtech start-up has secured €3.7 million in investment so far this year 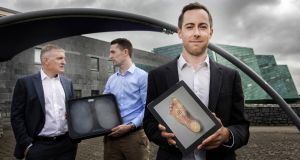 Irish medtech company Bluedrop Medical has secured €1.2 million in a seed investment round to bring the total raised by the start-up this year to €3.7 million.

The Galway-headquartered company, which was also awarded a €2.5 million European Innovation Council in June, is developing and commercialising an internet of things-enabled device for early detection of diabetic foot ulcers.

This is a medical issue which results in hundreds of thousands of amputations worldwide each year.

In Ireland alone more than 540 amputations are carried out on patients with diabetes each year as a result of foot ulcers caused by nerve damage. Bluedrop believes its device could save the Irish health service €40 million a year on treatments associated with diabetic foot ulcers.

Company founders Simon Kiersey and Chris Murphy estimate the total worldwide market for its device to be more than €3 billion.

The temperature-monitoring device allows for high-risk patients to be easily tested on a daily basis to see if they are showing signs of a developing ulcer. The device performs a daily scan of a patient’s feet and sends the data to the cloud for analysis through advanced algorithms capable of detecting abnormalities. By detecting skin damage early, thousands of potential amputations could be avoided.

The company secured the new seed investment in a round led by the angel investor network HBAN, a joint initiative of Intertrade Ireland and Enterprise Ireland.

HBAN’s MedTech Syndicate has invested €340,000 in total with one of its investors, Dr Colin Henehan, also joining Bluedrop’s board. Other participants in the seed round include Enterprise Ireland and the Western Development Commission.

The newly-secured funds are to be used to enable Bluedrop to further develop its device, carry out clinical trials and bring its product to market in Europe and the United States. The start-up also intends to boost headcount to 10 people.

“When we started doing our due diligence on Bluedrop Medical, we were very impressed by the focus and drive of the team and the size of the market that they will be tapping into. Chris and Simon have developed a class-leading device for early ulcer detection, resolving a huge unmet clinical need,” said Dr Henehan, who has more than 20 years’ experience in the pharmaceutical and medtech industries.