Analysts concerned at slowdown in bookings 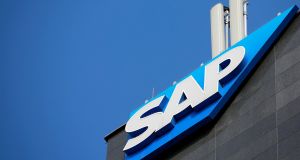 Shares in SAP dropped 3 per cent on Tuesday in Frankfurt, putting the stock among the biggest fallers in Europe. Photograph: Leonhard Foeger/Reuters

SAP has said growth in new orders in its key cloud computing division cooled sharply at the end of last year, sparking a drop in the German software group’s shares.

New cloud orders, known as “bookings”, rose 19 per cent, but 10 percentage points of the rise was due to one large customer switching from an on-premise account to a cloud service. Bookings had increased 39 per cent in the third quarter. SAP employs 1,200 people in the Republic.

Analysts at UBS said that the slowdown in bookings was “a concern” even if the overall quarterly results were still “solid”.

Europe’s largest tech company – which has pushed aggressively into online-based applications – said on Tuesday it expected adjusted cloud revenues of €8.7 billion to €9 billion in 2020, up 24 to 28 per cent at constant currencies. The projection would represent a slowdown from last year’s 35 per cent growth.

“The reality is cloud is the focus now,” said Julian Serafini at Jefferies. “So it does raise questions as to what is leading [the deceleration in growth]. It’s a little concerning.”

Shares in SAP dropped 3 per cent on Tuesday in Frankfurt, putting the stock among the biggest fallers in Europe. This was in spite of fourth-quarter results that came in broadly in line and the company raising its profit outlook for the coming year.

The weaker cloud revenue outlook will disappoint investors, analysts said, given the company – like the industry as a whole – has sought to ramp up its focus in this area. Under its recently departed chief executive, Bill McDermott, SAP made several cloud-based acquisitions, most notably buying rival Qualtrics for $8 billion (€7.3 billion) in cash in November 2018, just before it was due to go public.

The damped expectations in the key growth area came despite an upgrade to SAP’s anticipated profits in 2020 on the back of what the company called “remarkable top line momentum”. It expects operating profit of €8.9 billion to €9.3 billion in 2020, ahead of the €8.8 billion to €9.1 billion it previously foresaw.

Founded in 1972, SAP rose to become Germany’s most valuable company by market value, employing nearly 100,000 people worldwide. It boasts almost half a million enterprise customers, but faces tough competition from the likes of Salesforce, Oracle and Workday.

Tuesday’s fresh forecast numbers came as the group reported results for the final quarter of 2019 that were largely as anticipated. It brought in revenues of €27.6 billion for the full year on an adjusted basis, up 9 per cent on the previous year at constant currencies. Operating profit rose 11 per cent to €8.2 billion. – Copyright The Financial Times Limited 2020

1 How can I view my dead brother’s will if I’m not the executor?
2 Michel Barnier rejects UK’s call for Canada-style trade deal
3 Barry’s Hotel at €8m comes with potential to double in size
4 Credit Suisse among banks reprimanded over handling of $660m Abacha accounts
5 Mount Charles wins €10m catering contract at Maynooth University
Real news has value SUBSCRIBE