Tech Tools: This wifi-connected system has a camera that can talk to your toddler 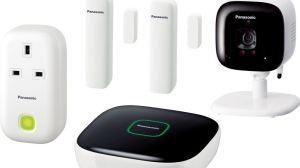 Panasonic has been making some moves on the smart home market in recent times, with a range of cameras and sensors that can kit out your home and turn it into a 24-hour monitored machine.

You might wonder why you really need an internet-connected smart camera. Fair point: most people probably don’t want to have remote eyes on their houses around the clock. But there are times when it is a useful thing to have. If you have pets, for example, that you want to check in on. Or small children that still need a baby monitor.

It’s inevitable that one of Panasonic’s smart home products is aimed at parents. It’s pitched as a home monitoring kit, but the indoor camera comes with lullabies and the ability to talk back to your child.

In the box, you get an indoor camera, a smart plug, a window or door sensor, the hub and a 4GB microSD card. The plug turns almost anything you want into a smart appliance, allowing you to turn it on and off remotely – for example, the camera. That can also be linked to the door/window sensor: it can be set to trigger the camera when a door or window is opened, giving the whole system wider applications than a simple baby monitor would.

The camera connects to your home wifi through a hub. Getting the hub set up was probably the most difficult part of the whole exercise – and it wasn’t that problematic. However, for someone with little tech expertise, it may seem daunting.

It goes like this: plug in the hub to a power outlet, download the Panasonic Home Network app to your mobile device and follow the step-by-step instructions to get it connected to your home wifi. To access the system on your mobile device, you have to register each one with the hub. It’s easily done with the app, and you can register up to eight devices once the initial set-up is done.

The app itself is functional rather than fashionable. It’s not the most beautifully designed app you’ll ever come across but it gets the job done.

One caveat: the hub only supports the 2.4GHz band, so if you were hoping to use it with a 5GHz device, you’re out of luck. And it goes without saying that you’ll need to keep your wifi hub and the Panasonic hub switched on to access the system, no matter where you are. The app doesn’t give you any warning if the hub is turned off; it simply won’t allow you to access any of the options in the app, or show you any information about your connected devices.

The important thing about the camera, though, is its quality. The video quality is reasonable – its VGA is 640x480 and, in low light, it switches to a night mode automatically. The quality of the video can be adjusted between low and high, depending on what your network can handle, and while it won’t rival the HD cameras, it will do enough to help you keep an eye on your child. There’s a talkback function, too, allowing you to speak to your baby without having to enter the room. When you have a child who stirs multiple times a night, that function is more useful than you realise.

Unlike with some baby monitors, you can’t customise the lullabies available. D-Link, for example, allows you to put your own music on the baby monitor’s playlist through a microSD card.

You can use a microSD card on the Panasonic monitor, but it is for saving photos and videos that you capture on the camera.There’s a 4GB card included in the box too.

The selection of lullabies you’re given isn’t too bad, and babies aren’t known to be too fussy about what song lulls them to sleep – at least none that I’ve known.

The Panasonic kit is reasonably easy to set up, once the hub is connected and ready to go. The hub can also form part of a wider smart home system, since it uses the same app. You can add up to 50 sensors to the system, from cameras to door sensors.

If you are looking to use this purely as a baby monitor or pet camera, there are other, cheaper solutions out there. But they won’t offer the same flexibility once your child outgrows the need for a baby monitor. The camera’s VGA quality may also be a little too low for some people.

You can save footage from the camera directly to a microSD card, through a slot in the hub. It’s not included in the box, though, so you will have to buy it separately.

If you are on the lookout for a system that could grow with your family, this may well be it. If you just need a simple monitor, though, the Panasonic system may be overkill.