Shares in Apple, Microsoft and Google have fallen sharply in the last week 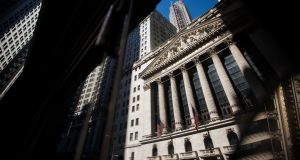 The New York Stock Exchange (NYSE) is reflected in a window

When it comes to the ongoing technology slump in the stock market, it appears not all shares are created equal.

Indeed, just five names account for nearly 75 per cent of the drop in the Nasdaq Composite Index, which has fallen more than 2.1 per cent since June 7th. Meanwhile, the Dow Jones Industrial Average and S&P 500 Index are roughly unchanged over the same time frame.

Much of this dynamic is due to giants like Apple, Microsoft and Goggle parent Alphabet falling as much as 6.5 per cent. Those companies account for nearly 30 per cent of the index’s weighting, and their outsize impact has driven the gauge lower even though the bulk of the stocks are doing fine.

This selloff was “way overdue given the extreme out-performance and positioning in technology shares,” Morgan Stanley analyst Michael Wilson wrote in a note to clients Monday, Shares of Apple, for instance, are still up 25 per cent this year, giving them room to fall.

But while Mr Wilson expects the drubbing to continue in the short-term, he doesn’t think the market has seen a peak in tech shares.

“We would be surprised if this is the end for technology stocks given the very strong earnings growth we are witnessing,” he wrote.

Analysts now believe performance in technology will depend on the economic outlook. And if conditions change, finance will be the likely beneficiary.

“If the current economic ‘Goldilocks’ environment persists, technology and other growth stocks should continue to outperform, despite today’s price declines,” Goldman Sachs analysts led by David Kostin wrote in a note to clients late Friday.

“However, if investors recalibrate expectations for inflation and Fed policy to match the growth optimism suggested by the SandP 500 level, higher rates should lead to financial sector outperformance,” he added.