Tech Tools: Can your smartphone – plus add-on – really hear your baby? 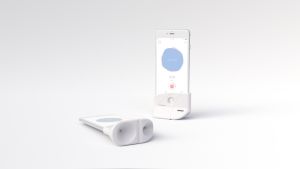 If there is one part of doctor’s appointments most people don’t mind when they’re pregnant, it’s when they crack out the ultrasound and you can see – and hear – the impending arrival pootling around your womb. It’s not something that can easily be recreated at home though – well, the video aspect at least; hearing the heartbeat outside the confines of a medical setting is a little more attainable thanks to home foetal dopplers.

But ask any midwife or maternity care professional if it’s a good idea to invest in one and the answer tends to be no. First off, you don’t know what you’re listening for. Hearing a heartbeat may seem simple, but babies are tricky and unco-operative, even before they emerge. Even doctors can have trouble at times.

Secondly, because you don’t know what you’re listening to, you may get false reassurance. What you think is the rise and fall of a baby’s heartbeat may simply be your digestive system getting to work. Similarly, there’s also the chance of a major panic when you realise you can’t hear anything discernible.

So home dopplers generally aren’t advised by your doctors – or at least, I’ve never found one who told me enthusiastically that they were a great idea. Still, people invest in them.

But the advent of smartphones has meant there are new tools at your fingertips. Apps that cost a few euro claim to use your smartphone’s microphone to find a foetal heartbeat and give you that calming dose of reassurance.

Last year, wearable tech firm Bellabeat put out Shell, an app that would allow you to not only hear your baby in the womb, but record it and share it with your family. It’s a simple idea: remove your phone case, put your phone in airplane mode, start the - free - app and move your phone around your abdomen on bare skin until you find what you’re looking for. The app should only be used from 30 weeks, according to Bellabeat; anything under that and it won’t work reliably.

Then there’s the add-on. Currently costing $69, it slips on to the end of your iPhone (sorry, Android users) and it is intended to amplify what you can hear going on inside. It’s inspired by the Pinard horn, which is a more traditional a definitely less high tech way of hearing a foetal heartbeat, but a tried and tested one.

On the app, Bellabeat gives you examples of what you should hear under different circumstance – when the baby is moving, when the mother’s heartbeat is overlapping, and so on. At 35 weeks, I was in the ideal timeframe for it, so it seemed as if it would be easy.

Famous last words. Even with the app – and the help of a trained professional, I might add – finding what I would have identified as a heartbeat was incredibly difficult. Lots of abdominal sounds. A few thumps. I did manage to find my own heartbeat with no trouble though, and the sound was clearer with the add-on, so the device definitely works.

The one time I got something I thought was a heartbeat, it turned out I was doing it wrong. The app also gives you a warning when it thinks you may not be using it correctly, resulting in a false heartbeat. That’s a handy feature, because otherwise I would have been content with my fake heartbeat, thinking this was a great device altogether.

Even when I turned it over for a professional to have a go, all she could find was something that could have been a heartbeat, but could have been lunch. And when we put it on her abdomen – definitely not pregnant, by the way – similar sounds could be heard. Ditto for my two year old.

The web, meanwhile, is full of high praise for Shell. It makes me wonder if I’m doing something wrong. Maybe I’m not relaxed enough? ( Possibly) Maybe I’m looking in the wrong place? (Unlikely) Maybe I just have the least co-operative child around? (That doesn’t bode well for the future)

Or maybe some people are getting the fake heartbeat without realising it. Considering some users are claiming to have picked up a heartbeat at under 10 weeks – something Bellabeat says Shell isn’t really suited for – maybe I just need to take those claims with a pinch of salt.

Shell doesn’t pretend this is a medical-grade device. It’s nice to think that an iPhone app and its algorithms could help you hear your baby whenever you want, but it’s never going to rival what you’ll get at your medical appointments.

The guides to help you figure out what you should be hearing are helpful, as is the warning when the app detects you aren’t using it correctly.

At $69, the add-on is a little on the pricey side for what it is. To put it in context, a pinard horn costs under €20. Good luck using it, mind you, and it won’t record the baby’s heartbeat for you in a nice shareable sound file, but the free Shell app will do that without the add-on anyway.

Getting this to work correctly is as much luck as it is down to the technical expertise of the app. It certainly works – picking up your own heartbeat is a good test – but there are so many variables that make it a bit hit and miss. The app is available for any iPhone, but the add-on reviewed only fits the iPhone 6 or 6s; all other model s are marked as sold out on the website.

This didn’t really work for me, but there are plenty of others singing its praises. Don’t expect too much and you can’t be disappointed.