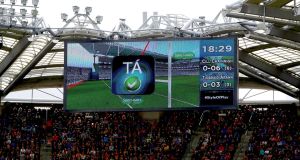 The Hawk-Eye technology has become an integral part of the big GAA match occasions at Croke Park and Semple Stadium over the past number of years and new accounts show that revenues at Hawk-Eye Innovations Ltd increased by 27 per cent in the 12 months to the end of March last.

However, expansion costs at the UK-based company contributed to pretax profit declining by 50 per cent to £2.9 million.

The introduction of VAR and the application of the technology continues to cause weekly controversy and the directors’ report states that the sharp increase in revenues has been “mainly driven by the European soccer leagues adopting video-assisted referee and goal-line technology”.

The directors state that Hawk Eye Innovations Ltd had a successful year. “At the same time, the company has made significant investment in both assets and headcount increases, resulting in a reduction in operating margin from 19 per cent to 8 per cent year on year.”

Revenues for the UK and Ireland last year remained the same at £9.7 million.

Along with the Bundesliga and French Ligue One, Serie A uses the VAR technology provided by the Sony-owned Hawk-Eye Innovations.

The Hawk-Eye technology was installed at Croke Park in 2015 and Semple Stadium the following year. A spokesman for the GAA said: “The association has no plans to expand its use at this time outside the venues where it is already in operation.”

At Croke Park, the technology involves eight high-speed cameras with the ball position triangulated using four cameras covering each end of the stadium.

First used as a broadcast tool to analyse decisions in cricket, Hawk-Eye has now become an integral part of more than 20 sports and every year covers 20,000 games or events across more than 500 stadiums in more than 90 countries.

1 Whistleblower warned EY of Wirecard fraud four years before collapse
2 Irish food trade could slide by one-third if EU and UK fail to cut deal
3 Subway bread too sweet for the Irish tax authorities
4 Google tells workers to return to country where they are employed
5 Google to lease extra 70,000 sq ft of London office space
Real news has value SUBSCRIBE