iPad Air: A fully featured device that could replace your laptop

Apple’s lighter, cheaper tablet doesn’t skimp on the power and has Pencil compatibility 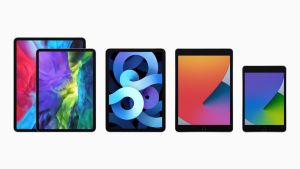 It’s hard to believe that the iPad Air has been around in some form since 2013. It has always felt a bit more premium than the standard version, with a more streamlined design and, as the name suggests, altogether lighter tablet than its stablemates.

The latest version of the iPad Air continues that trend, but with a different design. It’s less of an iPad Air and more of an iPad Pro Lite. It takes a lot of the good things about the iPad Pro – the design, the Pencil compatibility – and leaves out the one thing that could be putting people off: the price.

Lookswise, it is more than a little inspired by the Pro version of Apple’s tablet, with flat edges, although the different colour options indicate a bit of a departure from the Pro.

The 10.9in screen is sharp and clear, giving you excellent colours regardless of whether you are editing video or binge-watching Netflix. And because Apple has gone for a more iPad Pro-like design, the tablet has given over more space to the screen. The bezels have been shrunk right down, so Apple could squeeze more display into the case. It has full lamination and the anti-reflective coating reduces glare significantly.

Camera-wise, the iPad Air is a step up from the regular iPad. It sticks with the single 12 megapixel f1.8 rear camera, but it records video in 4K. The front-facing camera is also more advanced, although just short of the iPad Pro. It’s a seven megapixel camera alright, but it lacks the TrueDepth functionality of the iPad Pro. That means no FaceID for biometrics, although it’s not the biggest loss. In general, the shots produced by that front-facing camera are excellent.

Because it doesn’t have the advanced camera features of the iPad Pro, the tablet uses Touch ID instead of Face ID to log you into your device. But with the iPad Air being practically all screen, there’s no Home button on the bottom. Instead, Apple has built it into the side button. That required a bit of work, given the size of the side button compared with the regular Home button that Touch ID used before. Overall though, the Touch ID sensor was accurate almost every time.

The iPad Air may have cut down on a few things but it’s not scrimping on power. The iPad Air comes with the A14 Bionic chip, Apple’s newest and most advanced chip. Apple claims the new chip has a CPU that is 40 per cent faster, with graphics performance improved by 30 per cent and a new neural engine that boosts machine learning. The A14 is fast enough to cope with almost everything you can throw at it, even heavy duty games on the iPad, and still gives you the battery efficiency you need. Put it side by side with the last version of the iPad Air and you’ll see the difference.

The new Air has stereo speakers rather than the quad speakers of the iPad Pro. That can make the sound a little unbalanced depending on how you are positioning the device, but you really have to be looking for the differences to spot it.

As far as a laptop replacement goes, the iPad Air may not be there for everyone just yet, but it is certainly close. Add in the accessories such as the Apple Pencil and the smart keyboards that Apple offers (as extras) and you have a fully featured device that could potentially replace your laptop.

And while the Air has ditched the stereo jack for your headphones, it has also made another change that might sit better with people: it has opted for the USB C port over the Lightning connector.

The new design makes the iPad Air feel like the iPad Pro but without the weighty price tag. It offers great performance in an eye-catching design, especially if you go for the newer colours.

If you wanted to keep your headphone jack, prepare to be disappointed. It’s Bluetooth headphones for the majority of us here.

The new iPad Air works with the smart keyboards and other accessories, including the Magic Keyboard. The iPad Air works with the iPad Pencil. That in itself is not new, but the decision to go with the second generation pencil rather than the first gen that the regular iPad uses certainly is. There are no caps to lose, and the Pencil charges by attaching magnetically to the side of the screen.

Is this the best iPad you can get? For most of us, without the budget of the Pro, the answer is a resounding yes.