All the technology you need for your summer holidays

A few tips to make your journey a little smoother 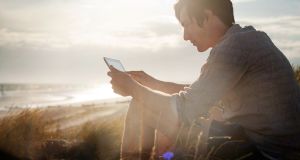 Check roaming fees if you are travelling outside the EU. Photograph: iStock

Planning a trip this summer? There’s an app – and some tech – to help you tackle most of your travel problems, from keeping in touch to tracking down your bags.

The first thing most people want to know about is their mobile phone. Will it still work? And, more importantly, will it cost me a fortune to use it while I’m away?

The EU regulations that brought an end to roaming charges between member states may be a relief to most holiday travellers. But what if you are travelling outside the European Union?

This is where things start to get a little more tricky. And expensive.

As soon as you land in a country and your phone connects to the local mobile network, you’ll get a cheery message welcoming you to the country and pointing out how much your mobile network will charge you for making and receiving calls and sending text messages. Depending on where you are heading, that figure can be a terrifying read.

Every mobile operator has their own deals and prices, so if you are travelling with someone on Vodafone and you are on Three Ireland, the prices will likely differ.

So before you go, it’s best to figure out what is the least expensive way to keep in touch. The first step is to find out what roaming charges your mobile network imposes for the country to which you are travelling. Vodafone, for example, offers a flat fee of €2.99 per day for calls and texts back to Ireland, plus data allowance in countries such as the US and Canada, and €4.99 for Asia, Australia and other areas.

If your network’s charges are too expensive, you have a few options. If you have a phone that’s not locked to a network – ie one that you can put any operator’s Sim into – you could buy a local Sim to use for data while you are there.

Make sure the Sim is compatible with your phone before you buy it. There are different sizes – most phones in Ireland work on nano Sims but it’s best to check before cracking open the non-refundable package – different technologies and also different cellular frequencies. For example in the US, you have GSM and CDMA networks.

You could also get a good data plan and use Skype to handle your voice calls while you are travelling, signing up for a Skype Out number, adding Skype credit and forwarding all your calls from your existing mobile number to the Skype one.

If you have an iPhone Xs, you can sign up for a local data plan to work alongside your home mobile number. Or you could just turn off your phone and revel in the silence. It’s up to you.

When you swap the Sim out of your phone, you don’t lose your apps. However, some of your messaging apps may complain about it. That’s because they are generally linked to your phone number. If you change Sim and your number, you lose access to the messaging app until you put your original Sim back in the phone.

Trying to travel light? Holidays used to mean trying to cram some paperbacks into your hand luggage, but these days you can go digital and save yourself the space.

Amazon’s Kindle has boosted the popularity of ebooks, giving you access to thousands of titles with a couple of taps.

That gives rise to another dilemma: a separate Kindle e-reader or just stick with the app on your phone or tablet? There are a couple of advantages to the Kindle reader. Some models are designed to mimic paper, which means they are easier on the eyes than regular phone and tablet screens. That means there is no dreaded blue light to deal with either, interrupting your sleep. And as a final point in their favour, the batteries are designed to last for days, so you won’t have to charge it every night.

Of course it’s an added expense if you don’t already own a Kindle reader, and it’s another thing to carry with you when you already have a full load. Plus not all Kindles are waterproof, which means poolside reading is a little risky.

The other option is a decent set of headphones – noise cancelling earphones are a must for any travel – and a decent range of audio books.

We have all done the Dance of the Lost Luggage at some point in our travels. You know the one: crane your neck to see if your bag is coming off the carousel, walk the length of conveyor belt in case you missed it, then walk back in case it’s on the other side and heading your way. Finally, surreptitiously check out your fellow travellers to make sure they haven’t accidentally taken your bag by mistake, before stalking off to the lost luggage desk to fill out several forms.

Some airlines send you updates on your bag as soon as you hit the tarmac, so you know whether or not it made the incredibly tight connection or is lounging in the baggage area back in Miami. But what if you aren’t travelling with one of these helpful companies?

There is a solution: GPS. With GPS you can pinpoint almost the exact location of your bag and use the app to get directions to its location.

Some luggage is now offering built-in GPS, such as Samsonite’s GeoTrackR bags. But you don’t need to go binning the suitcases just yet – you can buy a small luggage tracker that you can add to your existing cases. Samson year, for example, has partnered with LugLoc, but you can buy that tracker separately for about $70 (62).

The Trackisafe luggage device – sold in Ireland by Vodafone as V-Bag – will set you back €60, plus €2.99 for a month to keep the service active.

The downside? They cost a little more than your cheap luggage tag with your name and address on it, and you’ll likely have an ongoing charge – a few euro a month at most – to keep the service active.

Other bags offer Bluetooth tracking through Tile or Similar tag makers. That is fine for short-range tracking, but once Bluetooth trackers go out of range of your phone – 30-90m depending on the tracker – you are depending on other Tile Users being in its vicinity so you can locate your bag.

Years ago, travelling meant one thing: travellers’ cheques. More secure than carrying cash, the documents could be swapped in participating places for money. But now card payments are more common and ATMs are easily accessible abroad, so travellers cheques have fallen out of favour. However, using your card in a different currency can result in charges from your bank.

A new breed of financial technology companies are stepping into the breach. Revolut, for example, allows you to hold balances in foreign currencies – dollars, sterling, Bulgarian Lev, Thai baht, you get the idea – and spend it on your card. You get to avoid the horrible charges and also keep an eye on what you’re spending through the accompanying on your smartphone.

Another option is Transferwise, which offers a debit card and an online account that you can use to swap your cash into foreign currencies.

Apps – before you go

There are some apps that you should download before you go.

Although we all have the default weather app on our phones, it is worth seeking out another option. Accuweather gives you the temperature plus how it really feels due to humidity or potential windchill. YR.no gives you a map with weather variations in the area, so you can see it at a glance.

Maps and city guides are also a good resource to have. Google Maps allows you to download offline maps so if you lose your internet connection you can still find your way around.

While you are making your way around, you can get some tourist friendly information with guides by Lonely Planet or FourSquare Local.

Can you trust what you read online? That’s a problem that many travel companies are dealing with these days. The first port of call for many would-be travellers is TripAdvisor, which has built up a reputation for itself as a “know before you go” resource.

It is certainly popular. The site gets about 456 million visitors each month. While the company started out as an aggregation of guide books, it quickly found its unique selling point was customer generated reviews. You know, the ones that tell you how nice the night staff are at a particular hotel, or how the building noise from the construction site opposite once kept a particular irate traveller awake in 2010.

Word of mouth is a powerful thing. But behind the genuine reviews though, there is a shadowy world of bought and paid for praise – and criticism – that TripAdvisor has been battling. From review bombs – a series of one-star reviews that drown out the positive feedback – to fake reviews inflating a hotel’s or restaurant’s standing on the site, there are plenty of reasons to be a little wary of taking everything you read at face value.

For example, in 2017 Vice contributor Oobah Butler – a former author of those fake reviews – made his Dulwich-based shed the number one restaurant in London, thanks to the help of friends and family and a whole heap of hype. On its opening night, they served frozen ready meals.

There are fraud detection measures in place: TripAdvisor has software that flags suspicious patterns, for example. But like most things, the black market for fraudulent reviews eventually figures out ways around these systems.

Of course TripAdvisor isn’t the only one facing this issue. Yelp is also fighting the tide of fake reviews, and Amazon is also taking measures to guard against fakes.

The best approach? Take all reviews with a pinch of salt. They are only one person’s opinion after all.