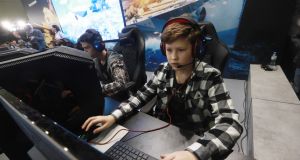 Nearly one in two children say they are playing online games rated for over-18s by the time they reach sixth class in primary school.

Research by Zeeko Education into online behaviour among Irish children shows that even by the time they are in first class (age six to seven), 28 per cent say they have played an adult-rated game, which rises to 43 per cent by sixth class.

Online gaming is much more popular among boys than girls. Throughout primary school they play online games four times more than their female peers.

The authors of the report, Dr Marina Everri and Kirsty Park, took particular interest in the access to over-18s online games among primary school pupils because it indicates young children doing something they know is against the rules.

While few adults would countenance nearly half a primary school sixth class trooping into a cinema to watch an over-18s film, attitudes seem to be lax when it comes to gaming.

“I think parents are not aware of the content of these games,” said Dr Everri, a cyberpsychologist. “It is a very typical all-children culture – they are very good at finding and exchanging these games and keeping them secret from their parents.

“I also think parents underestimate gaming in general. They think it is normal activity for children to play games but they are exposed to aggressive content.”

The percentage of boys playing an over-18s game is higher in Deis primary schools than other schools. The 55 per cent of them doing it in third class rises to 71 per cent by sixth class. In non-Deis schools, it goes from 39 per cent to 63 per cent.

One explanation for this might be that parents in Catholic schools exercise less control over gaming than other activities, said Dr Everri. They might also have less knowledge about games age limits.

1 Medtronic aiming to make 1,000 ventilators a week in Galway by June
2 Ryanair leads rebound in Irish stocks as coronavirus toll slows
3 Chopra warns coronavirus will have ‘deeper’ impact than financial crisis
4 Senior managers at INM agree to temporary 10% pay cut
5 Eurobonds are not the answer to coronavirus woes
Real news has value SUBSCRIBE