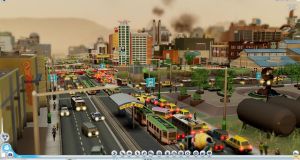 Love it or loathe it, SimCity certainly has everyone talking. The city builder has been long awaited since EA gave us a teaser of it at E3.

This reboot of the popular franchise is a bit of a mixed bag. On the one hand, when you play, it’s amazingly detailed and just as addictive as you remember. On the other, server problems have meant that actually getting to play – and ensuring that your progress saved correctly – was a massive issue. That’s because the new SimCity requires an internet connection; welcome to the new era.

But it seems EA has managed to solve most of the problems. And once you get in to SimCity, it’s worth sticking around. You can get down to the nitty-gritty of running your very own city, deciding taxes, installing basic services, and generally being an all-round fabulous mayor.

There’s almost too much going on at times. You have to keep an eye on the mood of the population, which is affected by everything from being unable (or too stupid, in some cases) to find the nearest shop. Their needs can be a bit vague.

And as your city grows, so do its problems. That traffic build up your Sims are complaining about is visible on the screen; the existing facilities need to be upgraded or you risk losing residents; and there’s always the ever- present danger of a natural disaster that could destroy large swathes of your carefully crafted city.

The cities may be smaller and more restricted than before, but it means you have to consider your moves carefully; there’s little point in going mad zoning areas as residential if you don’t have the commercial activity to make sure they’re gainfully employed. And industrial activity has to be weighed against its impact on the environment.

The graphics are a huge leap forward for the franchise, with the new Glassbox engine playing a brilliant role in this.

So thumbs up to EA for its efforts with SimCity ; thumbs down for the server hiccups. EA may need to take a second look at that “always on” requirement for future games

1 Cork shootings: Gardaí investigate whether attack was planned by two of the deceased
2 Cork shootings: Postmortems on two of three family members complete
3 Ciara Kelly: I was pregnant, unmarried, a junior doctor and I got old-school comments
4 Kanturk farm shootings: A timeline
5 Former solicitors ran an ‘identity factory’ in committing fraud – court told
6 Coronavirus: Too early to say if Ireland has turned a corner, warns Tony Holohan
7 Michael McDowell: We must check if this Covid-19 lockdown is really necessary
8 Son (23) who died in suspected Cork murder-suicide was due to graduate
9 Cork suspected murder-suicide may have been over disputed will
10 Large retailers modify stores and block off non-essential products from customers
Real news has value SUBSCRIBE