Such acts increases with age, but levels are consistently higher in Deis schools 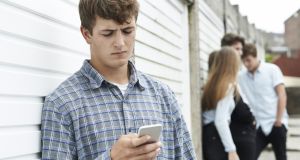 Overall, sexting is much more common among male adolescents, with 41 per cent of boys in sixth year saying they have sent a sext, compared with 26 per cent of girls. File photograph: Getty Images

Risky online behaviour such as cyberbullying, sexting and speaking to strangers is more prevalent among children attending schools in socio-economic disadvantaged communities, according to new data to be released on Saturday.

In all schools this type of behaviour increases with age, but levels are consistently higher in Deis (disadvantaged status) schools, research by Zeeko Education, based in the innovation hub NovaUCD, shows.

The percentage of students who have been cyberbullied increases from 13 per cent in first year to 20 per cent by sixth year in Deis secondary schools. The corresponding figures for non-Deis schools are 12 per cent, rising to 17 per cent

Speaking online to strangers is part of the gaming culture, but adult predators can use this gateway to inveigle their way into children’s lives.

Zeeko’s report Children’s Online Behaviour in Ireland 2016-18 is one of the biggest studies of digital trends to date, involving surveys of almost 36,000 children ranging in age from six to 18 in 244 schools around the country. The questionnaires were filled in by children themselves, with the help of teachers where necessary.

As well as capturing an overview of trends, the researchers looked for similarities and differences between children attending schools located in disadvantaged communities and other schools. They also compared results from schools that differ in ethos, specifically Catholic versus multi-denominational schools*.

Sexting is more common among pupils attending secular schools rather than Catholic schools. “Interestingly, 42 per cent of teenagers in fifth year in multi-denominational schools* sent sex messages versus 24 per cent in fifth year in Catholic schools,” Zeeko’s head of research, cyberpsychologist Dr Marina Everri told The Irish Times. She will present some of the findings at the School Expo in the RDS on Saturday, ahead of publication of the full report on zeeko.ie at the end of March.

Overall, sexting is much more common among male adolescents, with 41 per cent of boys in sixth year saying they have sent a sext, compared with 26 per cent of girls.

Dr Everri analysed the data by school type, Deis versus non-Deis, because she was curious to see if there was a difference in online behaviour between those living in communities where there is likely to be more disadvantage in their offline world, and others.

“I was presuming that children who live in these communities are in families with more problems in terms of social disadvantage and maybe these families are less able to monitor children’s behaviours,” she said. “So, I wanted to see if these children had different behaviours online than children who attend non-Deis schools.”

As it is Government policy to provide extra support for Deis schools, these findings show that more needs to be done to tackle online aggression and cyberbullying through promotion of emotional well-being and better relationships, Dr Everri said.

“Children in Deis schools are probably more vulnerable,” she added.

One “unusual” finding, which bucked the trend, was the lower level of sexting among girls in Deis schools by the time they reached sixth year, compared to their peers in non-Deis schools.

Some 31 per cent of sixth-year girls in non-Deis schools have sent a sext message, 26 per cent a sext image and 13 per cent have sexted somebody they met online. But among teenager girls of the same age in Deis schools, those figures are just 18 per cent for the first two forms of sexting and fewer than one in 10 has sexted an online acquaintance.

“The only interpretation I can put on that is they are more mature,” said Dr Everri. She believes girls in Deis schools may have more experience of sexual matters, which has made them more cautious about what they do online in this area. “The others might be more naive in non-Deis schools.”

The research also illustrates how cyberbullying is much more prevalent among girls than boys in secondary school. By sixth year, 60 per cent of girls say they have witnessed it and 31 per cent have been cyberbullied, compared with 37 per cent of boys who have seen it happen and 11 per cent who have been the victim.