Connemara hotel warns of job losses due to lack of broadband

Renvyle House Hotel has lost €200,000 worth of conference business over the issue

Tanaiste Simon Coveney and Labour leader Brendan Howlin get involved in a heated Dáil exchange following the withdrawal of Eir from the procurement process to provide broadband in rural Ireland. 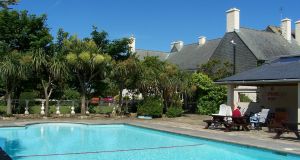 One of the largest hotels in Connemara has warned that poor broadband infrastructure will cost jobs.

Ronnie Counihan, managing director of Renvyle House Hotel, said conference business worth more than €200,000 has been lost in recent years due to poor broadband.

“We’ve had to take that hit,” Mr Counihan told The Irish Times on Thursday.

“We’ve tried to replace it with other business but conference business is normally around March, April, September or October, shoulder season stuff, so it’s very hard to replace that.

“Our conference business has gone from being an important part of our business portfolio during the year to being absolutely nil because people are not able to hold conferences without proper fibre optic broadband.”

The hotel, which is located on a 150-acre estate, employs about 75 staff and has played host to Lady Gregory, WB Yeats and Winston Churchill.

“If there’s less business, there’s less jobs, there’s no doubt about that. Being one of the biggest employers in Connemara, that’s very serious,” Mr Counihan said.

“We have a lot of local permanent jobs, we only close for holidays. It’s not as if it’s a seasonal operation. We try to keep it going as long as possible.

“Now the hotel could end up closing winter time or around shoulder season and there could be a loss of jobs. Jobs in rural areas are very important, especially in rural Ireland. We’re as rural as you can get. The next stop for us is New York – that’s how far west we are.”

Mr Counihan said he was “shocked” following Eir’s announcement on Wednesday that it was withdrawing its bid for the Rural Broadband Plan.

“It could take years now,” he said. “Guests nowadays, one of the first things they ask about is the speed of the broadband, especially American guests. If they don’t have broadband they feel like they’re being cut off from the rest of the world. People get very annoyed about it.

“Having fibre optic broadband is like having clean water to drink these days or telephone lines. It’s as basic as that. Certainly rural Ireland shouldn’t be penalised in the way that it has.”

Mr Counihan said the hotel would continue to lobby local politicians but admitted the area is often “forgotten about” because it is so rural.

1 Wetherspoon’s panto-villain chairman may have the last laugh
2 British exceptionalism backfires in style as Johnson tests positive for coronavirus
3 Will Covid-19 force Primark to rethink decision not to sell online?
4 Mobile, broadband suppliers to be given extra radio spectrum
5 Volkswagen burning through €2bn in cash per week
Real news has value SUBSCRIBE