Microsoft and US government gear up for privacy-rights case 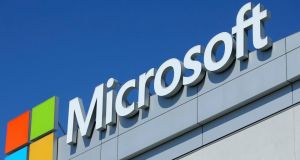 Microsoft: the US government says prosecutors are entitled to data it stores overseas. Photograph: Mike Blake/Reuters

A major privacy-rights fight between Microsoft and the US justice department that began in Ireland reaches the American supreme court this week, with the justices to consider whether US law allows prosecutors to compel technology companies to hand over data stored overseas.

The case pits the interests of tech companies and privacy advocates in safeguarding customer data against the demands of law enforcement in obtaining information crucial to criminal and counterterrorism investigations.

Closely watched by other countries wrestling with similar concerns, the case began with a 2013 warrant that prosecutors obtained for emails of a suspect in a drug-trafficking investigation that were stored in Microsoft computer servers in Dublin. The company challenged whether a domestic warrant covered data stored abroad. The justice department said that because Microsoft is based in the United States, prosecutors were entitled to the data.

A 2016 decision siding with Microsoft, by the New York-based 2nd US court of appeals, marked a victory for tech firms that increasingly offer cloud-computing services in which data is stored remotely.

President Donald Trump’s administration appealed that ruling to the supreme court. Globally dominant American tech companies have expressed concern that customers will go elsewhere if they think the US government’s reach extends to data centres around the world without changes being made to the law.

“Recipe for international tension and chaos”

Microsoft, which has 100 data centres in 40 countries, was the first American company to challenge a domestic search warrant seeking data held outside the United States. Brad Smith, Microsoft’s president and chief legal officer, said last week the US government should not be able to act unilaterally to access such data without taking into account the laws and interests of other countries. “It’s more likely to be a recipe for international tension and chaos.”

If the supreme court were to rule in favour of Microsoft the government could still gain access data held overseas, but the process would be more cumbersome and potentially take longer.

Bipartisan legislation has been introduced in the US Congress to update the Stored Communications Act, the 1986 statute whose provisions have led to the legal action. The move, backed by both Microsoft and the administration, would let US judges issue warrants while giving companies an avenue to object if the request conflicts with foreign law. If Congress were to pass the bill before the supreme court ruled, the case would likely become moot.

The Microsoft customer whose emails were sought told the company he was based in Ireland when he signed up for his account. IBM, Amazon, Apple, Verizon Communications and Alphabet’s Google were among other companies to file court papers backing Microsoft. Google has mounted challenges similar to Microsoft’s.

The administration has the support of 35 states, led by Vermont, who say they routinely seek access to data stored overseas, especially in cases involving child pornography. Several countries, including Ireland and Britain, filed court papers raising concerns about the US government’s position.

The Irish Government said in its brief that the question of how law-enforcement authorities can access such information is already covered by a 2001 treaty with the United States that allows for information sharing and enforcement of court orders. The treaty’s procedures “represent the most appropriate means to address requests such as those which are the object of the warrant in question”.

The US supreme court has ruled twice in recent years in major cases concerning how criminal law applies to new technology, both times ruling against law enforcement. In 2012 the court held that a warrant is required to place a GPS tracking device on a vehicle. In 2014 it ruled that police need a warrant to search a mobile phone seized during an arrest.

The nine judges justices will hear arguments on Tuesday. A ruling is due by the end of June. – Reuters