Qualcomm faces fines of €580,000 per day over EU antitrust order 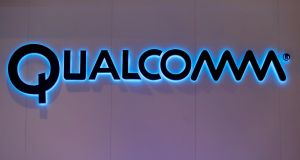 Qualcomm faces fines of €580,000 per day after losing a court bid to block a European Union order requiring it to supply information for an antitrust investigation into the chip company’s sales tactics.

Qualcomm must answer regulators’ questions because it didn’t show that the EU demand put its business or financial health at risk, EU general court president Marc Jaeger said in an order on the tribunal’s website. While Qualcomm can continue to fight the issue, it must comply and hand over information to officials.

Qualcomm could be on the hook for penalties “in the range of several millions of euro” if it continues to resist the demand for the data, needed in the final stages of an EU investigation into predatory pricing of chipsets, according to the court order.

The risk of new fines adds another front to Qualcomm’s battles with regulators over its sales tactics as Apple ramps up a global dispute with the company, withholding billions of dollars in payments that’s forced Qualcomm to slash forecasts.

The case is one of two antitrust probes the EU is weighing as it separately examines the company’s $47 billion takeover of NXP Semiconductors NV. Qualcomm declined to comment. The European Commission said it welcomed the court order.