Is Amazon working on a messaging app? 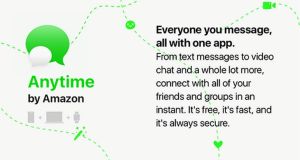 Amazon’s Anytime: The app appears to have similar functionality to existing ones such as WhatsApp and Facebook Messenger.

Amazon is rumoured to be working on a standalone messaging app for iOS and Android as well as desktop, according to technology news website AFTV News, which reports that Amazon has already been carrying out user surveys to get feedback on the messaging app known as Anytime. This app would follow Amazon’s launch of Chime earlier this year, an enterprise video chat tool designed for online meetings from both desktop and mobile.

The app appears to have similar functionality to existing ones such as WhatsApp and Facebook Messenger, with now-standard messaging features including stickers, photo filters, GIFs, emojis and embedded games. It is also said to boast extra communal features such as sharing location, listening to music with friends, the ability to order food together and splitting a bill while dining out.

Although it seems the messaging app market is saturated and has stabilised around WhatsApp, Messenger, iMessage and Snapchat, this move for Amazon could be the beginning of standard service integration where users interact with chatbots to buy products, order food and consume music and movies, all areas Amazon can tie together.