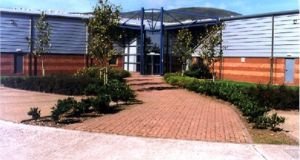 The Andor Technology premises in Belfast. The company increased its research and development spend during its last financial year to £5.7m

The company said its gross margins had increased over the period due to a “more favourable sales mix in the year, and the impact of foreign exchange movements”.

Andor, which was initially spun out from the physics department of Queen’s University, has been part of the London-listed tech company Oxford Instruments since 2014.

The Belfast company increased its research and development spend during its last financial year to £5.7 million, which represented 8.4 per cent of its turnover. It also had cash balances of £15.9 million by March 2017.

In terms of outlook, Andor’s directors said the company had a significant number of customers based outside the UK, and as such net assets could be “adversely impacted by movements in foreign currency rates”.