IT giants too creative in application of word ‘innovation’ 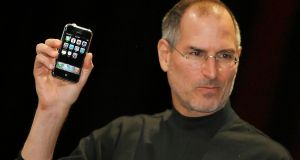 A few weeks earlier, I’d ordered a new Mac, and couldn’t resist the offer of an iPod for some cut-price additional amount. iPods were new, and so exciting. I’d only ever seen one at a press event. I was delighted with my new device.

My flight seat partner was, to my surprise, also wearing Apple’s then-distinctive white iPod earbuds. Hardly anyone at the time had an iPod. Those white headphones were like a coded sign for a secret society.

“Wow, you have an iPod? So do I,” he said, launching a long conversation about then-struggling Apple and the truly amazing innovation of the iPod.

Innovation: technology’s favourite word. Yet these days, so leeched of meaning.

Apple, in the six-ish years since Jobs’ death? For me, disappointing. The Apple Watch? Meh. Macs and iPads haven’t significantly improved. The addition of the Touch Bar on new Macs is fun, but not must-have innovation.

I recently got a new MacBook Pro to replace my ageing Mac Air, but it wasn’t a galvanising purchase. However, a year and a half ago, I was excited to be purchasing the, yes, innovative Microsoft Surface Book, a laptop that can fold backwards, or come apart into a tablet, and which has a superb touchscreen that works with pen, finger or keyboard.

I still use both Mac and Microsoft. But Microsoft is looking far more innovative.

Yet I recall a time when Microsoft was using the word “innovation” differently, as an excuse. Back in the late 1990s, it was engaged in an anti-trust battle with the US department of justice, which had charged the company with unfairly dominating the nascent browser market by bundling Internet Explorer with Windows.

Microsoft argued that integrating IE enabled “innovation” because other Windows applications could then interact more easily with the PC and web. Microsoft executives and lawyers bandied about the word “innovation” like their own special get-out-of-jail free card. Innovation, it was tacitly implied, was sacred in the tech world. Department of justice, back off.

I interviewed Steve Ballmer in Dublin in 1999, at the height of the case and the so-called “browser wars” and (unbeknownst to the world) just weeks before he would take over as chief executive from Bill Gates. I had 19 minutes with him. The one question I had to ask? “Define innovation.”

He laughed. He knew what I was really asking. His evasive answer: “I think innovations are new things that are good for people, that people use. Now take Windows. It was a new thing people used because we were able to synthesise – it’s not all new ideas but it was an unique synthesis that made something popular, that basically no one else could make as popular as we did. And it wasn’t just that we had many users – the first system didn’t have many users – it was the combination of that, and supporting multiple hardware platforms and application models and application availability.”

I quote this because it’s a ridiculous definition of innovation, and one that, now, is increasingly used across the tech industry. But it’s a doublespeak inversion of innovation.

Real innovation was Netscape’s browser, the first easy tool for browsing this new thing called the web. Internet Explorer, based on Netscape, tightly bundled with Windows, became a tool for tying down users and developers to an operating system and platform.

Microsoft’s defence is my marker for the point when the tech sector started to fork the concept of innovation. On one side: exciting creativity, exciting products. On the other: a hollow but revered word knowingly used as an untouchable defence for domineering moves beneficial to corporations, at the expense of actual innovation.

The underlying goal of this “innovation” defence, generally, is to keep people within an ecosystem and monetise them in various ways, these days especially via the data they give up to the ecosystem in order to use its (typically “free”) features. Think Google/Chrome/Android/Gmail. Think Facebook. Think many apps. Think just about every corporation.

Recently, US Federal Communications Commission (FCC) chairman Ajit Pai prominently used “innovation” as an excuse for abandoning the policy of net neutrality (treating all traffic equally on the net and disallowing selectively blocking or privileging traffic). Big and powerful US telecommunications companies – which often dominate US regional markets with no effective competition – couldn’t innovate and offer exciting new services and products unless net neutrality was dumped, he (and the industry) argued.

Don’t be fooled. As with so many uses of “innovation” now, that’s the wrong “innovation” fork. We need to reclaim this abused word from the corporate tech world, and give it back some actual meaning.