Privacy and security will be the big tech stories of 2018 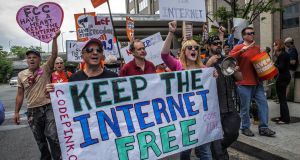 New neutrality: The general public and the business world have never been as aware of privacy issues as they are now. Photograph: Bill O’Leary/The Washington Post via Getty Images 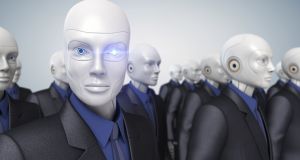 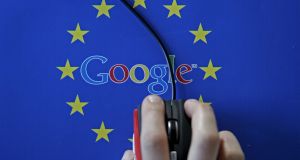 In terms of media coverage, 2017 was a fine year for alternately fretting or fawning over AI (artificial intelligence) and robots. Hardly a week seemed to pass without some story eagerly speculating about a just-around-the-corner world in which one or the other either will or won’t take away our jobs, will or won’t solve everything from fake news and rogue trading to elder care and modern warfare, will or won’t win at chess or Go, will or won’t be the best/worst tech thing ever.

Here’s a shocking prediction: 2018 will not be the year in which either of those developments suddenly changes everything forever. Or when AI combined with robots produces our new tech overlords.

Yes, both these arenas of tech exploration will develop, evolve and integrate with life in interesting, surprising and probably, alarming ways over (many years of) time. But short term – looking ahead in the year just born – forget intelligent robots plotting a coup in Brussels or replacing the US president Donald Trump. Here are five aspects of technology that really will impact the more immediate future.

Thanks to widespread heavy social media use, data breaches, US threats to demand account passwords from travellers, concerns about secretive state-run surveillance, some US and EU critical court cases and a consequent acceleration in popular awareness, the general public and the business world have never been as aware of privacy issues as they are now.

In this area, 2018 will be big. The most mega is the EU-wide implementation of the General Data Protection Regulation, aka the GDPR, in May. This will not only fix wide-ranging protections for EU citizen data but also impose strict obligations on data handling both inside and – significantly – outside the EU.

Undoubtedly linked to this is the future of Privacy Shield, the critical EU/US data transfer agreement which eases compliance for companies that move EU data into the US (with its weaker data protection environment).

Despite the European Commission stating in an October review that the US effort looks fine, Europe’s Article 29 working party group of national data protection commissioners just issued its own report noting that unless the US significantly improves Privacy Shield data protections in several areas by the GDPR launch date, they’ll go to court to get the opinion of the European Court of Justice.

So, much hangs in the balance in 2018 for governments, businesses and consumers as these concerns are resolved (or not). Which brings us to…

The European Court of Justice

While Europe’s highest court (and powerful EU equivalent of the US Supreme Court) has always been the final legal stop for the consideration of business and other issues, the ECJ in recent years has quietly become a globally influential shaper of the technology industry.

Not only does it adjudicate on acquisitions and operations, but cases that might once have been considered by the European Court of Human Rights – say, because they involved data transfer issues, personal privacy and business obligations – now are routinely directed towards the mightier arm of the ECJ. Mightier because, unlike the ECHR, the ECJ can enforce decisions.

ECJ opinions on the balance between business, security and personal privacy have been strongly weighted towards protecting the civil and human rights granted to the citizen. That has meant multinational tech giants such as Facebook and Google have had to change the way they do business.

Eventually, perhaps in 2018, the court is expected to consider Privacy Shield. In a global business world beholden to data access and use, what they say in this case and others will alter and sculpt the tech business landscape of the future. Much of the international tech industry, especially in the US, still doesn’t seem to get this key point.

Net neutrality in the US

Mid-December brought the long-expected post-Trump election vote by the US Federal Communications Commission (FCC) to abandon the principle of net neutrality.

No longer must all internet traffic, be it an app, an email, a Skype call, a business application or a streaming video, be treated equally. Telecommunications carriers and internet service providers (ISPs) at last have their wish, the possibility of charging more for certain types of traffic. And potentially, of discriminating in other ways, such as slowing down or even blocking some traffic while speeding up others.

Trump-appointed FCC chairman Ajit Pai said the decision was all about increasing innovation. Because apparently, ISPs are dying to introduce new services but have been suppressed by the cruel ingression of net neutrality.

What happens next? Either the vote will be nullified through state-threatened legal action or, possibly, new legislation from congress. Or, we’ll see companies and network providers morphing to conform or exploit the new reality.

Does that matter to us, over here in the EU, where net neutrality is fixed in 2015 legislation? Yes, because US companies and particularly, Silicon Valley firms, have set most of the global tech innovation agenda. If the FCC vote holds, Europe will be hit too – though the US’s troubles may be the EU’s business opportunity.

The new year will bring the consequences of a two-pronged taxation shift. First, the EU is introducing ways to address the wily tax avoidance techniques of companies, multinationals in particular. Ireland too has introduced a scheme to limit such lucrative shenanigans.

Meanwhile, the Republicans have finally managed to pass a solitary piece of major legislation under Trump, the highly unpopular new tax scheme. In speeches and comments, Trump and various surrogates named Ireland as one of the bad guys, a place multinationals go to find a friendly welcome for their tax manoeuvres.

Awkward. However, it stretches credulity to believe the new US tax scheme will cause Irish foreign direct tech investment to suffer (there are myriad of other reasons companies come here, not least that there’s a whole ecosystem of other companies, we speak English, and we’re not doing the Brexit thing).

But such taxation shifts are likely to change the way in which companies do business, structure their foreign branches, and behave – at least outwardly – in the coming year. Witness Facebook’s announcement in December about where it will book revenue (hint: not Ireland).