Paul Allen: The reclusive billionaire who changed the tech world

Karlin Lillington: Microsoft co-founder was part of the firm’s nerdish yin and yang 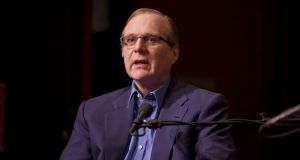 Had I ever met Paul Allen? Following the announcement of Allen’s death at 65 this week from non-Hodgkin’s lymphoma, an editor wanted to know if I’d ever had the chance to interview him.

No, I said, though I explained I did have one odd, albeit distant, connection to Allen.

For most of the past decade I’ve spent a couple of weeks each year on the big island of Hawaii (the one with the enthusiastic volcano), renting a lovely little 1950s tin-roofed house outside Kona. Perched on the edge of old lava flows next to the sea, the house’s immediate neighbour is a 10-acre luxurious compound owned by Paul Allen.

It’s a bizarre juxtaposition, as if a modest two-up, two-down woke up to find a sprawling Killiney mansion with a star resident next door.

Allen’s land encompasses the precise area that once was the home of Kamehameha the Great, the Hawaiian ruler, born in the 1700s, who first united the Hawaiian islands into a nation. This area, revered by native Hawaiians, had already been developed, controversially, long before Allen bought it.

Allen departed Microsoft in 1983 after a diagnosis of Hodgkin’s lymphoma. A billionaire in his 30s, unsure of how long he might have to enjoy that wealth

He seemed to be viewed favourably by local residents, seen as a benign and generous presence. Locals were familiar with his huge yacht, which would anchor occasionally in the deep waters directly in front of the little Kona house. We never saw him, but our family friends, who own the incongruous 1950s house, had met him and say he was low-key and amiable.

Those friends, who have nothing to do with tech, are the only people I know who’ve met the reclusive billionaire. Even though I’ve been writing about the technology industry for more than two decades, and attended countless events, and know many other journalists who’ve done the same, no one had met Allen. Allen just never appeared at such things.

By the time I started writing in the 1990s, he was long gone from Microsoft, the company he co-founded with childhood friend Bill Gates. Allen departed in 1983, when Microsoft had a mere 500 employees, after a diagnosis of Hodgkin’s lymphoma. He was then a billionaire in his 30s, unsure of how long he might have to enjoy that wealth.

Quite a while, as it turned out, even though he again faced cancer in 2009, this time non-Hodgkin’s lymphoma. He beat it then, but it recurred recently and ultimately was the cause of his death at a relatively young 65.

After Allen left Microsoft, he receded far into the background of the tech industry, and for a very long time was best known as the low-profile owner of several professional sports teams.

He certainly enjoyed his vast wealth, buying serious toys for big boys, such as the guitar Jimi Hendrix played at Woodstock, various planes, his portfolio of sports teams, several lush properties, including the ocean-front Kona compound, and one of the world’s largest yachts (reportedly costing a breathtaking $200 million).

Only in later years had he grown in visibility as a major investor, philanthropist and supporter and funder of a wide range of scientific research, including ocean-focused studies at the University of Hawaii.

He always seemed to me to be uncannily Steve Wozniak-ish, as if every tech company needs a nerdish yin and yang. Like Apple co-founder Woz, Allen was a deeply intelligent geek with a variety of interests, some of them surprising (Wozniak shared Allen’s passion for rock music, for example, though Allen never duplicated Woz’s unlikely but endearing spin on Dancing with the Stars – the US take on Strictly).

'I met Paul when I was in seventh grade, and it changed my life,' Gates wrote in remembrance

And like Woz, Allen was eclipsed in the public eye and memory by a brilliant, volatile, self-focused, and sometimes painfully petty co-founder.

Similar to Wozniak with his 2006 autobiography iWoz, Allen eventually wrote a memoir in which he too picked apart some of the myths surrounding his co-founder and exposed some of his nastiness. Allen’s 2011 book Idea Man asserted that most of the big ideas behind Microsoft were Allen’s, not Gates’s.

The book also suggested that Allen didn’t leave the company in 1983 just because he was dealing with cancer, but also because of a Gates-induced toxic work environment.

“There were some things that nobody had ever really talked about – the final elements that led to my departure. I thought I should just record those,” Allen told the Guardian in 2011, noting nonetheless that he always had a good “complementary” relationship with Gates. Gates was probably “a bit surprised” at some parts of the book, he added.

I’d say that was an understatement, though it was by then mostly water under the bridge – as Allen insisted – for two ageing wealthy guys.

“I met Paul when I was in seventh grade, and it changed my life,” Gates wrote in remembrance this week, adding: “Microsoft would never have happened without Paul.”