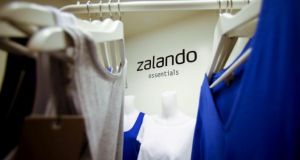 While its R&D hub is located in Dublin, Zalando does not currently ship directly to Ireland

Losses continued to mount at the Irish arm of online fashion retailer Zalando last year as its parent injected a further €6 million into the business.

The accounts show the parent late last year agreed to convert €6 million of loan financing into capital reserves as an additional non-refundable contribution.

The rise in losses at its Irish subsidiary came as administration expenses ballooned to €6.1 million.

Zalando’s Irish unit serves as the group’s technology hub with a focus on development work around data science, algorithms and related products, as well as development of other tech applications for the firm.

The Berlin-headquartered group, which has nearly 19 million customers who each make an average of 3.3 orders per year, opened its research and development centre in Dublin in 2016. It announced plans in April 2015 to create up to 200 jobs within three years at the so-called “fashion insights centre”.

Europe’s largest online-only fashion retailer, which employed 57 people in Ireland at the end of last year, was valued at $6.8 billion (€5.7 billion) when it floated on the Frankfurt stock exchange in October 2014.

Zalando’s core markets are Germany, Switzerland and Austria, although it now operates in 15 European countries with more than 1,500 brands including big names such as Gap, Banana Republic and Topshop.

While its technology hub is located in Dublin, the company does not currently ship directly to Ireland.

“We do not view Dublin as a profit centre in accounting terms, but it plays an important role in our strategy. Hence, we are willing to invest and fund the office from Zalando SE – this includes various ways of funding, such as loans or a capital contribution,” the spokesman said.

Zalando, which was established in 2008, began life selling shoes in Germany but now competes with the likes of British online retailer ASOS in the fickle “fast-fashion” segment. It recorded revenues of €3.69 million in 2016.

The company’s Irish subsidiary last year moved into a restored Victorian warehouse owned by businessman Denis O’Brien at Grand Canal Quays, where it pays a top-of-the range rate of over €800,000 per annum for the premises.

Staff numbers at Zalando Ireland rose to 57 from 28 last year with related costs jumping to €5.6 million from €1.3 million.

1 Grounded Aer Lingus pilots develop fix for turnaround glitches
2 Coronavirus: We must save lives but we also need to live
3 Moving in and out of lockdown is a recipe for economic disaster
4 Close to 300 Greencore staff test positive for Covid-19 in Northampton
5 Ivana Bacik opposes Bartra’s Ballsbridge shared co-living plan
Real news has value SUBSCRIBE